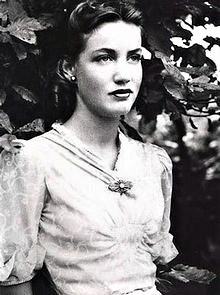 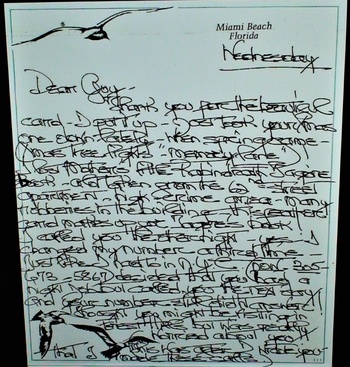 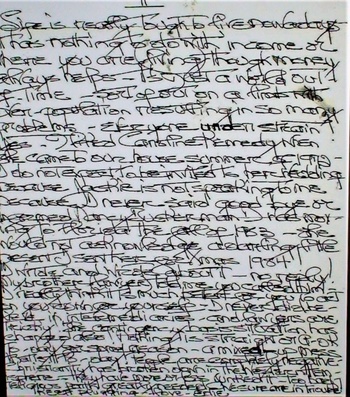 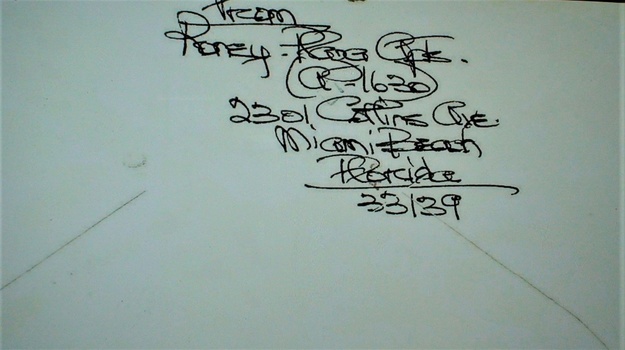 I purchased this letter from a special friend who was a special friend of Edith "Little Edie" Bouvier Beale, first cousin to Jacqueline Bouvier Kennedy Onnasis. I fell in love with "Little Edie" whenever I first saw the "Grey Gardens" documentary. I also loved the movie by the same name. I sincerely thank my friend for allowing me to own this special letter that Edie sent to him in May of 1986.
Edie's unique handwriting is difficult to read, but here are some of the highlights:

Edie writes that she liked Caroline Kennedy when she visited Grey Gardens in 1972. She didn't think she would be invited to Caroline's wedding because Jackie (Kennedy Onassis) stopped speaking to her when she (Edie) moved to Florida and did not tell Jackie or her secretary Nancy Tuckerman. Edie was angry at Jackie for never thanking her for a "darling little present" she sent Jackie for Christmas (1984), even though she mentioned the Christmas gift several times in letters to Jackie.
Edie also mentions losing a small book (in a robbery) by Rabindranath Tagore that belonged to her mother, Edith Ewing Bouvier Beale.
Edie adds at the end of her letter : "People are completely negative. Christianity has broken down in the Western Hemisphere. They have more or less junked it. Too bad--Religious Faith greatly needed. We sure are in great trouble."

From the Internet:
Edith "Little Edie" Bouvier Beale (November 7, 1917 – January 14, 2002) was an American socialite, fashion model and cabaret performer. She was a first cousin of Jacqueline Kennedy Onassis and Lee Radziwill. She is most known for her participation, along with her mother, with whom she lived, in the 1975 documentary film Grey Gardens by Albert and David Maysles.