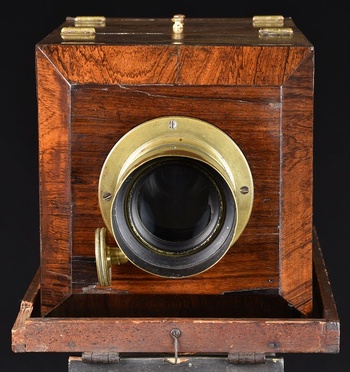 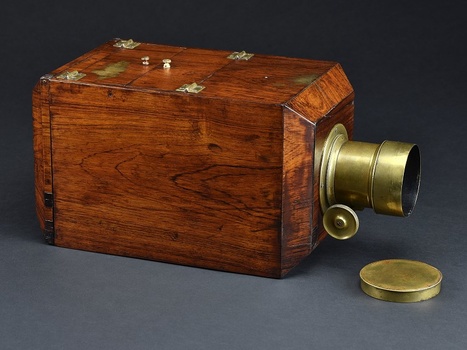 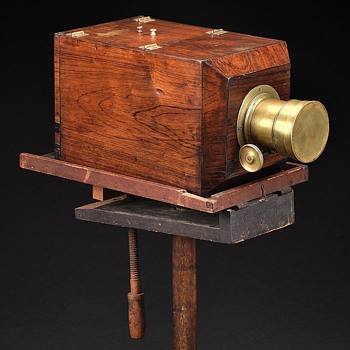 Capturing light to create permanent images is the ultimate goal of photography, and some of the most interesting early equipment built to capture light was made during the first stage of photographic technology - the daguerreotype era from 1839 to the early 1850s. Many cameras of this time were often constructed with the same care as fine furniture.

This ½-plate format (4¼ x 5½ inch) American daguerreotype camera dates to the first decade of photography and is the oldest in my collection. While not the earliest American camera, the rosewood veneered body with distinctive corner chamfering was made from roughly 1845 to the early 1850s. It is unclear why corner chamfering was popular in the United States, yet this body pattern is considered by most collectors as the epitome of all daguerrian designs.

Daguerreotype cameras are typically very robust; and this American-Style Chamfered design has wood sides ranging from ½ inch to just over 1 inch in thickness. All-in-all, early apparatus was very heavy. And a bit of trivia ... during this time, cameras were advertised as “boxes” and lenses referred to as “cameras”. It’s somewhat confusing when you think about it.

Daguerreotype apparatus was typically used for portrait work and petzval formula lenses are normally found with the cameras. The camera and petzval lens shown here are both unmarked, which is common. Although the maker is unknown, there are a limited number of references leading some collectors to believe these were made in Vienna for the American market. In one of his research papers, historian Nigel Russell notes that Henry H. Snelling, in his 1849 book THE HISTORY OF THE ART OF PHOTOGRAPHY, suggests that this style was copied from Voigtländer cameras that were being imported at that time.

Stands with tilting platforms held the cameras. Due to the cameras being very heavy, screws and sockets were not needed. Original stands with cast iron centers to hold the wooden legs, such as the one shown here, are actually rarer than the cameras.

Photographers cherished lenses and considered the “box” (body) as something that could be upgraded or thrown away. It’s amazing to consider the good-to-excellent condition of many of these rosewood veneered cameras in spite of their harsh photographic life.

Given how cameras were often treated and discarded, this particular camera is special to me because it was a workhorse that continued to be used into the 1850s as the daguerreotype process was being replaced by wet collodion technology. There are collodion stains on the top body veneer and inside the plate holder that were probably from the photographer shooting ambrotypes; a “wet” photographic process. Fortunately collodion, which is very caustic, was probably used sparingly and didn’t significantly decompose the wood beyond some surface staining.