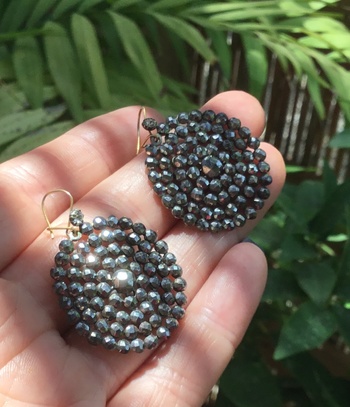 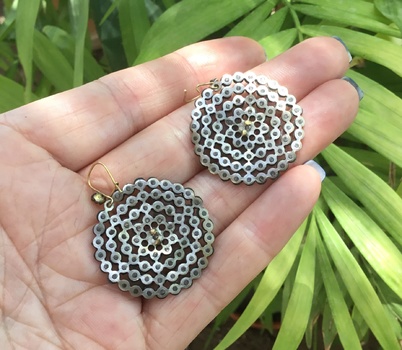 Following on from the choker I've just posted, these earrings are in my opinion definitely Georgian steel cut earrings. They are in wonderful condition, the gold shepherd hooks are I think a later addition, it is a nice touch that they added a paste stone to the bottom of the hook which blends in nicely with the earrings.
The history of cut steel jewellery is interesting, it has been suggested that cut steel jewellery dates back as far as the 16th century. France served as a major export market but this was interrupted when war broke out in 1793.
The popularity of cut steel in France may be in part have been due to sumptuary laws which limited who could wear precious metals and diamonds. Manufacture of cut steel within France is attested from 1780 and by the start of the 1820s France had a large amount of domestic production of cut steel. With the end of the Napoleonic wars British producers again started exporting to France. The fashion for cut steel jewellery in France was probably given a boost when Napoleon married his second wife Marie Louise and presented her with a parure consisting of cut steel jewellery as he was unable to afford one made of gems.
The quality and use of cut steel jewellery declined throughout the second half of the 19th century with stamped strips replacing individual rivets and pieces becoming increasingly flimsy, the final production ending in the 1930s.