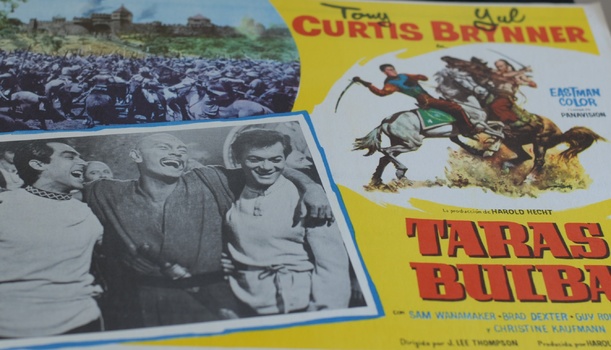 After seeing Lois's / Postcardcollector posts on Westworld starring Yul Brynner they brought back memories of this series and even earlier memories for a young me watching the 1962 movie Bulbas Tarus starring Yul Brynner and Tony Curtis who became 2 of my favorite actors after watching Bulbas Tarus it is one of those movies that stays with you over the years. The photos are of a 13 1/2" w by 16 1/2" L Mexican Lobby card

Storyline:
Taras Bulba is a 1962 film loosely based on Nikolai Gogol's short novel, Taras Bulba, starring Yul Brynner in the title role, and Tony Curtis as his son, Andriy, leaders of a Cossack clan on the Ukrainian steppes. The film was directed by J. Lee Thompson. At this time the Poles are overlords of Ukraine and the origin of the cossacks is struggle of the Ukrainian serfs to free themselves and their land of Polish domination. Toward this end Taras hopes that his son will be educated in the ways of the enemy. Instead, Andrei falls in love with the daughter of a Polish nobleman, setting the stage for a clash between love, family honor, and a struggle for national identity.

Title Lobby Card-Gaslight-Ingrid Be...
$61
See all