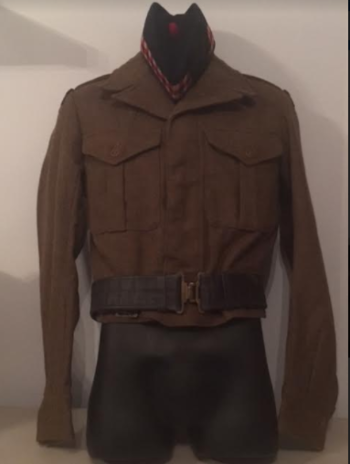 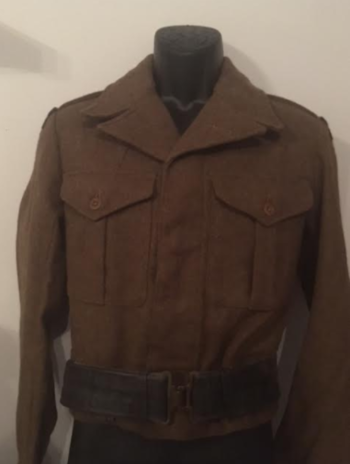 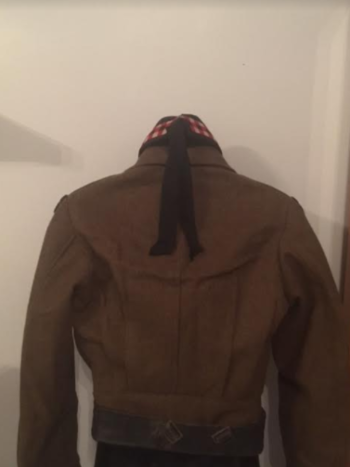 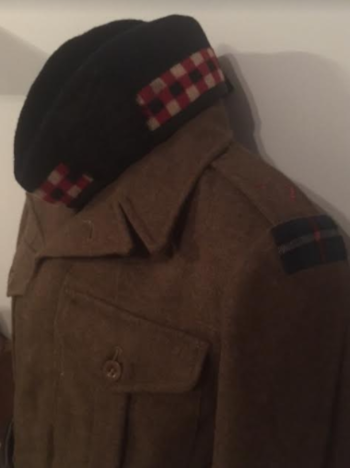 A very nice post-war grouping to the Seaforth Highlanders. The grouping is attributed to Second Lieutenant Ian Murray-Thomson, who served in the Malayan Conflict in the late 1940s and perhaps into the 50s. I have done posts (in fact my first two posts) on items to this Officer before, but now I have made some of the uniform items into a display. All three pieces on the display belonged to Lieutenant Ian-Murray Thomson, so that is why there isn't a lot of gear and other items on the display. This display grouping comprises of:

1. A very nice condition rare 1947 pattern battle dress blouse with great McKenzie tartan patches to the Seaforth Highlanders. 1947 pattern battle dress blouses are rare in their own right, but are somewhat disliked among some collectors. I personally like all battle dresses, no matter the pattern, and this one especially because is attributed to the Seaforths. To each shoulder board is red thread that is evidence of a singular removed rank pip per side, one star would be Second Lieutenant, which would make sense as Ian Murray-Thomson was a Second Lieutenant during the conflict. There is no damage to the BD, it is in overall fantastic condition for its age.

2. Nice and worn economy 1937 pattern webbing belt, blackened. If Murray-Thomson ever saw action during the conflict, this would have been there. Used post-war, but possibly bought second-hand and is from WWII. Nice condition but service used for sure.

3. Good condition, service used, "been there" glengarry. No badge but has holes and evidence of one once being there. This glengarry was my first post here on Collector's weekly and now it gets to make its return here on the display. I really like this glengarry as it was definitely service used. This may be earlier, WWII period and could have been purchases second hand by Second Lieutenant Murray-Thomson, as I was told by the seller (who got these from the estate of the Officer) that some of his items were purchased second hand and were WWII period.

Overall a nice grouping to an Officer who served post-war in the Malayan conflict. Two items that were also part of the grouping but are not on this display is the named khaki bonnet to Second Lieutenant Murray-Thomson and a WWII/Post-War plaque to the Seaforth Highlanders that I may do a post on in the near future.

I have more uniforms to share in the future, but only two half-mannequins that some of the uniforms don't even fit on. I am working on getting more mannequins but for the time being uniforms will have to be rotated on the mannequin currently displaying this fine grouping. I hope you have all enjoyed this post.