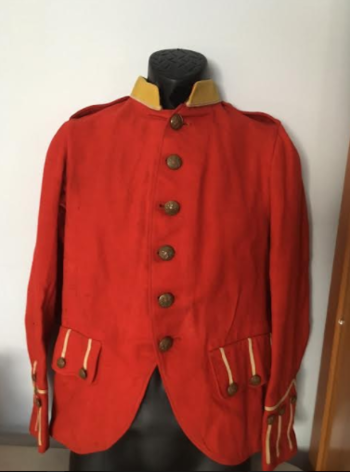 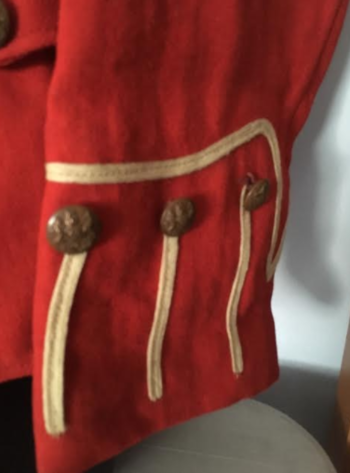 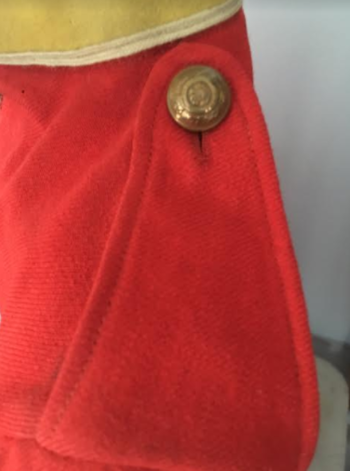 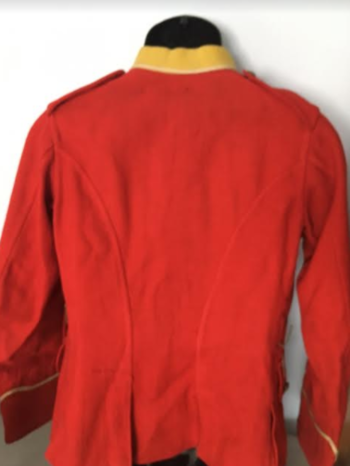 A very fine Pre-WWI Edwardian Highland Regiment Patrol Frock. The frock is in good condition for its age. On scarlet frocks and full dress doublets after 1902, the only two regiments that wore yellow facings on their frocks were the Gordon Highlanders and the Argyll and Sutherland Highlanders. Given its condition, the darkened buttons (as seen on other unissued examples), and that there are no badge holes anywhere, I believe this frock was originally intended for either of those two Highland Regiments. This frock was either issued to either the Gordon Highlanders or the Argyll and Sutherland Highlanders.

The frock sports darkened General Service Buttons with King's Crowns (in need of a polish), dating it to 1902-1914 period. To the cuffs are three buttons each, each pocket also was three buttons. The shoulder boards strangely enough have Welsh Regiment Officer's buttons, probably replacements long after this frock was created.

To the interior the clothing tag is unfortunately virtually non-existent, with the exception of a few paper shreds still stuck to the uniform.

These scarlet frocks have been documented to have been used in battle by some Scottish regiments in the late 1870s-1885 period, before the British Army's full transition from scarlet uniforms to be worn in battle to khaki. However, scarlet continued to be worn on full dress parade uniforms, mess dress uniforms, undress "walking out" uniforms as well as patrol frocks such as this one. This type of frock would've been worn in the barracks, or as a walking out uniform, and sometimes as a parade dress. I am not an expert on the exceptions for when these may have or may have not been worn, what is written above is my personal knowledge on these scarlet patrol frocks.