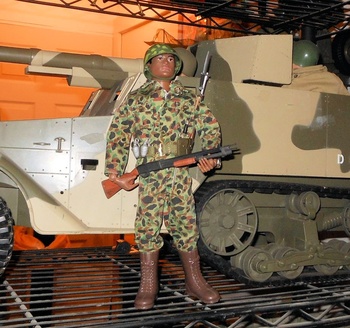 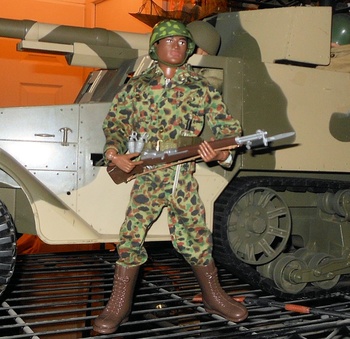 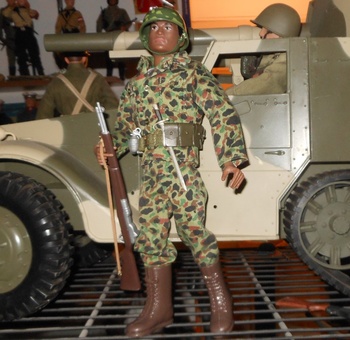 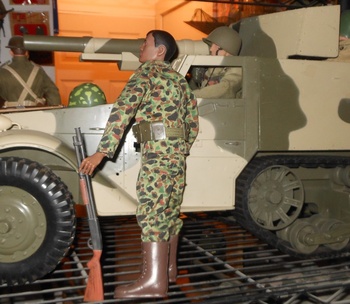 The Masterpiece Edition GI Joes were the first of faithful reproductions of GI Joe. They just came with the basic uniform and manual. I can spot them as the heads are a bit wider than the originals.
I mention that this figure is black for a few reasons. First that the black figures are more valuable than their Caucasian counterparts in this version and others such as the 40th anniversary sets. The originals released in 1964 were also one of the first if not the first black action figures.
In 1964 I will bet Hasbro executives were sweating buckets released the Action Soldier with dark skinned version. Collectors refer to these as Negro. Back in 1969 Hasbro released The Adventures of GI Joe and the black version had a sticker that said Negro Adventurer. The mail order boxes for the soldier I believe said Negro but I am not sure. May seem a bit dated now but it was ground breaking then. The original Negro Action Soldier is the most valuable figure in the line along with the GI Joe Nurse.
Now for history lesson part 2. The figure is equipped as a WWII Marine and yes there were black marines in WWII. They were known as the Montford Point Marines. That is where the blacks went through boot camp and training and then served in segregated units. Most fought in front line units. OK that justifies the marine uniform.
Most of the pieces and parts are 40th anniversary. The shotgun is Ultimate Soldier and the Japanese bayonet is from Cotswold.
That seems to be a lot to say about a reproduction figure.