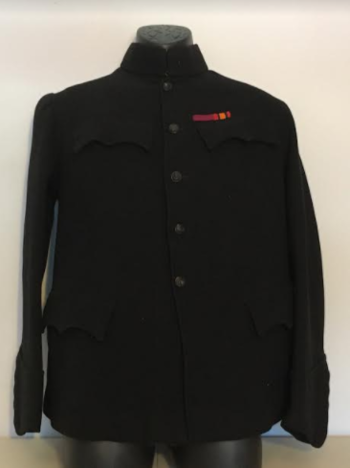 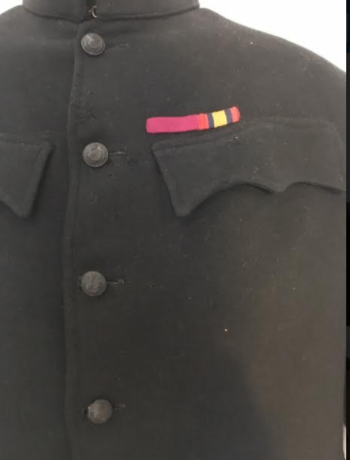 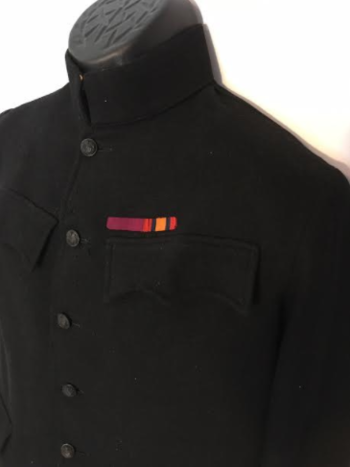 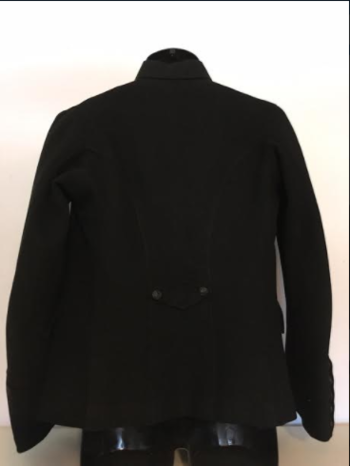 A nice condition Victorian Patrol Jacket/Frock to the Cameronians (Scottish Rifles). The frock is in overall good condition for its age, being over 100 years old. This is an Officer's frock, and sports a total of 17 Black Rifle Buttons (5 down the front, 5 per cuff, 2 to the back) with Victorian Crowns. The shoulder boards are missing, it would originally would have had rank stars on the shoulder boards, as well as one additional button per shoulder board. Unfortunately it is therefore impossible to determine what rank this frock to. 4 pocket frock, nice lined pockets. Overall nice condition, very minor damage for its age, some service wear.

To the interior of the frock, is grey wool lining. It does have a paper tag, and was originally named but unfortunately the name is scratched over, and illegible sadly. The frock is not dated, but dates to the late Victorian period. The interior has a few holes but overall nice good condition inside.

The frock has interesting ribbon bars sewn about the top right pocket. The first ribbon I believe is the ribbon for the Order of the Bath. Very odd and rare ribbon to find on any tunic, it is very possible due to the quality of the piece, it may have been a wealthy, important, and/or high ranking Officer in the Scottish Rifles, although it is unfortunately impossible to tell.

That means this Officer would have have served in the 2nd Anglo-Boer War, and the Queen's South Africa Medal ribbon would have been put beside the already present Order of the Bath ribbon.

The tunic itself may have been manufactured during the Boer War, or slightly before, perhaps Circa late 1890-1902. Nevertheless over 100 years old and in outstanding shape for a tunic of it's age, a quality piece for sure to an Officer in the Scottish Rifles that fought in the Boer War.

The 2nd, 3rd, and 4th Battalions of the Cameronians (Scottish Rifles) embarked for South Africa, however I believe the 2nd Battalion saw the most action, notably at the Battle of Spion Kop and the Relief of Kimberly. The Scottish Rifles earned two Battle Honours for their involvement in the Boer War: Relief of Ladysmith and South Africa 1899-1902.