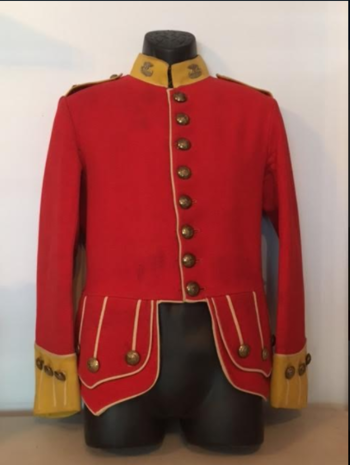 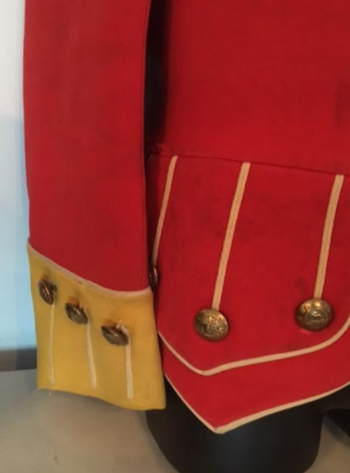 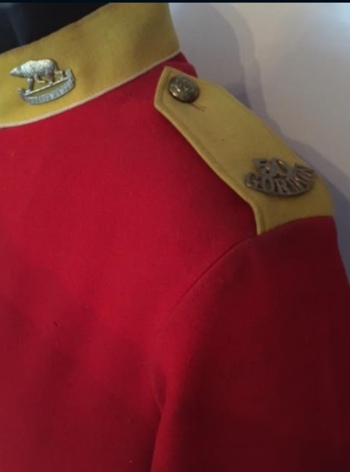 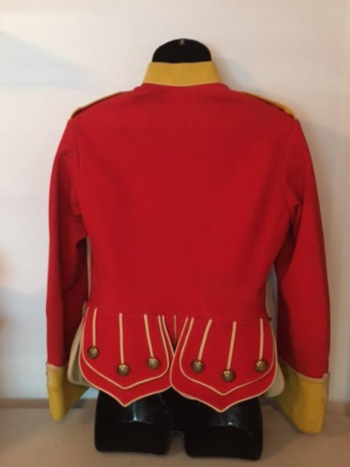 This is a scarlet full dress/parade doublet to the 5oth Regiment (Gordon Highlanders of Canada). The doublet is in overall good condition for its age, but does have some service wear, as it has had a long service life.

The doublet sports a total of 28 regimental buttons, 8 down the front, 3 per flap (there are 4 flaps), 3 per cuff, and 1 per shoulder board. One button on the left cuff is an original period replacement Canadian Scottish Regiment button, the rest are regimental 50th Gordon Highlanders buttons. It should be noted that the 50th buttons were made in Glasgow (as seen behind the buttons). To the collars are very nice regimental collar badges, a Bear walking over Latin letters, "Buaidh No Bas" - "Conquer or die". On the shoulder boards are rare and very nice "50 Gordon" regimental shoulder titles.

The interior of the tunic is in mostly good condition for its age, but does have slight service wear. A couple of stamps on the inside including "1st CS" which I assume means 1st Canadian Scottish.

It should be noted that this Doublet is actually published in a militaria reference book, "Military Antiques and Collectibles of the Great War" by Victor Taboika. It is apparently on page 128 of the book that is showcasing items to the 16th Battalion (Canadian Scottish) CEF, though I do not own the book so I haven't confirmed it for myself. The person I bought this from purchased it from Victor some time ago and now it's in my collection.

The 50th (Gordon Highlanders of Canada) were formed in Victoria in 1913 under Lt-Col. A.W. Currie (the famous Arthur William Currie, Canadian Military hero). The originally designated commanding officer for the new regiment failed to qualify for the post and Currie was approached as a logical replacement. Currie initially turned down the idea, likely recognizing that the cost of the new Highland uniforms and mess bills would only add to his financial problems. I find it interesting that these scarlet highland uniforms were part of his initial refusal to take command of the regiment. Currie did eventually reconsider and accepted the position. The 50th were one of 4 regiments to contributed to the 16th Battalion. The 50th continued to send drafts of men to various BC battalions throughout the war. The 50th (Gordon Highlanders of Canada) only existed for 7 years, until 1920 when it was amalgamated with the 88th (Victoria Fusiliers) to form the Canadian Scottish Regiment. I believe this tunic is one of 500 full dress doublets originally ordered for the regiment in 1913, these tunics I believe were made in Scotland and that explains the buttons made in Glasgow. The 50th was allowed to have the name and share the appearance of the Imperial Gordon Highlanders, these doublets have the same facings (yellow) as the imperial Gordon Highlanders. The 50th also used the Gordon kilt and other uniform items. This doublet is circa 1913-20, however I believe it remained in service into and after the creation of the Canadian Scottish regiment. This doublet could have had many wearers, but that is not for certain. The markings "1st CS" as well as the one Canadian Scottish button attests to this, and it is very likely it remained in service well into the 1920s.

The Canadian Scottish Regiment is a well-known regiment, and this doublet is a very nice piece of Regimental history, both to the 50th and to the Can Scots. Very rare piece, I've not seen another. Overall fantastic condition and displays great. I intend to get a kilt and glengarry for it eventually to make a display out of it. Being a British Columbian myself I was happy to get a piece of local regimental history. Because it is circa 1913-20, and possibly saw service in WWI (and possible before and after the conflict) I will be putting this in the WWI section. Well I had a lot to say on this piece and I think I've covered it all, mostly at least. Thanks for reading, hope you've enjoyed.