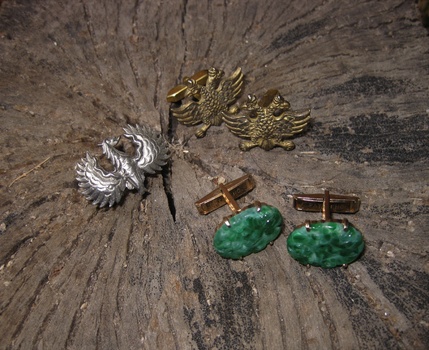 Thank you dear Moonstonelover - my favorite naturally is the single "phoenix" of pot metal. Will make a nice pin or maybe a ring.

Next 2-headed eagle marked 800 (silver with gold wash):
(Per Wikipedia) The double-headed eagle motif appears to have its ultimate origin in the Ancient Near East, especially in Hittite iconography. It re-appears in the High Middle Ages, from ca. the 10th or 11th century, and was notably used in the Byzantine Empire, but 11th or 12th century representations are also known from Islamic Spain, France and Bulgaria, and from the 13th century onward it becomes more widespread, and is used in the Seljuk Sultanate of Rum, Mamluk Egypt in the Islamic sphere, and in the Holy Roman Empire, Serbia and Russia in the Christian sphere.
Used in the late Byzantine Empire as dynastic emblem of the Palaiologoi, it was adopted during the late medieval to early modern period in the Holy Roman Empire on one hand, and in Orthodox principalities Serbia and Russia on the other, representing an augmentation of the (single-headed) eagle or Aquila associated with the Roman Empire.

Wonder if I have identified these correctly? Thanks for your comments!