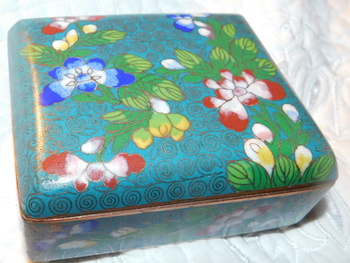 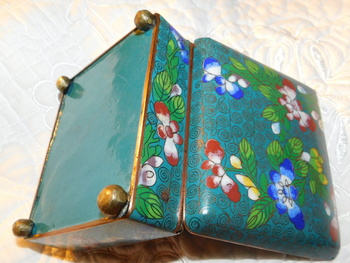 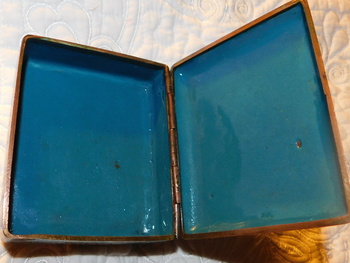 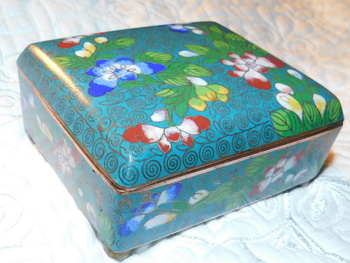 This box is covered with unusually fine cloisonne work. the four sides and top all have the same design motif. Nicely hinged at the back and sits on 4 separate ball feet. excellent condition, Appx. Measurements 4.5 inches x 2.5 inches x 1.5 inches

"Cloisonné is the technique of creating designs on metal vessels with colored-glass paste placed within enclosures made of copper or bronze wires, which have been bent or hammered into the desired pattern. Known as cloisons (French for “partitions”), the enclosures generally are either pasted or soldered onto the metal body. The glass paste, or enamel, is colored with metallic oxide and painted into the contained areas of the design. The vessel is usually fired at a relatively low temperature, about 800°C. Enamels commonly shrink after firing, and the process is repeated several times to fill in the designs. Once this process is complete, the surface of the vessel is rubbed until the edges of the cloisons are visible. They are then gilded, often on the edges, in the interior, and on the base.

In much Chinese cloisonné blue is usually the predominant colour, and the Chinese name for the technique, jingtailan ("Jingtai blue ware"), refers to this, and the Jingtai Emperor. Quality began to decline in the 19th century. Initially heavy bronze or brass bodies were used, and the wires soldered, but later much lighter copper vessels were used, and the wire glued on before firing.[19][20] The enamels compositions and the pigments change with time.

Chinese cloisonné is amongst the best known enamel cloisonné in the world.

In China Cloisonne was used for much larger vessels such as bowls and vases; the technique remains common in China to the present day, and cloisonné enamel objects using Chinese-derived styles were produced in the West from the 18th century.

About Cloisonne: Foreign influence contributed to the development of cloisonné during the early fourteenth to fifteenth century in China. The earliest securely dated Chinese cloisonné is from the reign of the Ming Xuande emperor (1426–35). However, cloisonné is recorded during the previous Yuan dynasty, and it has been suggested that the technique was introduced to China at that time via the western province of Yunnan, which, under Mongol rule, received an influx of Islamic people. A very few cloisonné objects have been dated on stylistic grounds to the Yongle reign (1403–24) of the early Ming dynasty.

Cloisonné objects were intended primarily for the furnishing of temples and palaces, because their flamboyant splendor was considered appropriate to the function of these structures but not well suited to a more restrained atmosphere, such as that of a scholar’s home. This opinion was expressed by Cao Zhao (or Cao Mingzhong) in 1388 in his influential Gegu Yaolun (Guide to the Study of Antiquities), in which cloisonné was dismissed as being suitable only for lady’s chambers. However, by the period of Emperor Xuande, this ware came to be greatly prized at court.

Department of Asian Art, The Metropolitan Museum of Art"