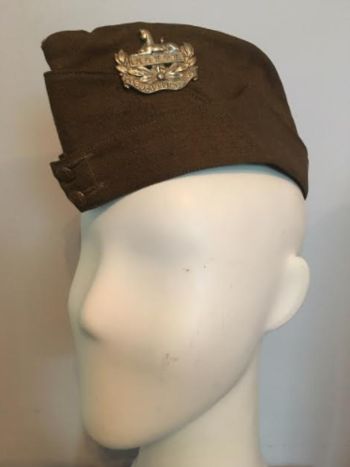 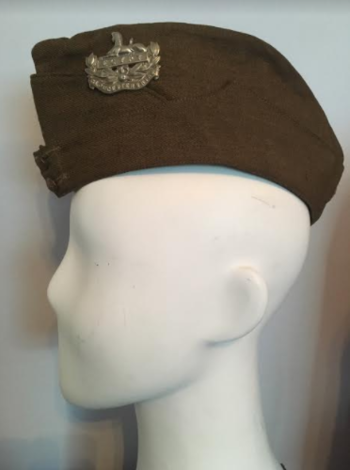 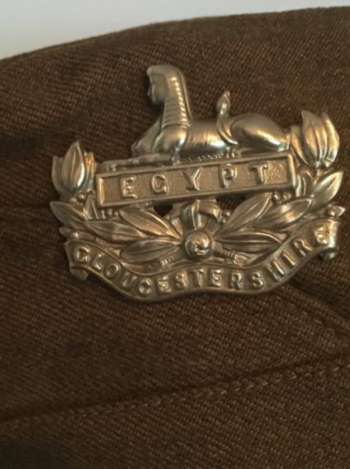 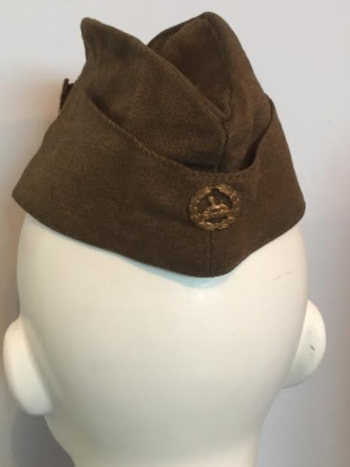 A very nice WWII period side cap attributed to a soldier who served with the Westcott Home Guard in WWII.

But why does the Gloucestershire Regiment headgear have back badges? This battle honour goes back to the Battle of Alexandria in 1801. Here is a small description of the event from Wikipedia...

"In March 1801 the 28th (the Gloucestershire Regiment was then 28th (Gloucestershire) Regiment of Foot, before it's amalgamation with the 61st (South Gloucestershire) Regiment of Foot) formed part of the British expeditionary force that landed at Aboukir Bay in Egypt to oppose Napoleon's Army of the East. On 21 March, during the Battle of Alexandria, French cavalry broke through the British lines, formed up behind the 28th, and began to charge. Still heavily engaged to their front, the order was given "Rear Rank, 28th! Right About Face", and standing thus in two ranks, back to back, the regiment successfully defended itself. For this action the 28th was accorded the unique privilege of wearing the regimental number both on the front and the back of its head-dress."

The back badge is unique to the Gloucestershire Regiment and can be found on no other caps except for ones to this regiment, or Home Guard units that used their caps. The back badge is not limited to side caps, and a few examples have even been found on helmets. I found this very interesting and that is why I like this piece so much.

The interior is in pretty nice shape but does have some shading. There appears to be various things written in there, but there are not many I can make out, some of it may just be staining, but there is at least one visible name that is not that of the original owner of the cap. I'll have to look at them with a magnifying glass when I have the time. The name(s), I would assume, are Home Guard buddies. Another reason why there are many names in there is it could have been issued to many soldiers, although I'm not sure on that. It is possible that is could have had service with the Gloucestershire Regiment prior to being allocated to the Westcott Home Guard although I'm not sure. It is stamped with a maker and date although unfortunately the date is illegible.

The side cap is attributed to Home Guardsman William Howick of Milton Court Farm in Westcott who served in the Westcott Home Guard during the Second World War. It was given to the dealer who sold it to me by Mr. Howick on the 14th of June, 1979 and has been with the dealer until now and it's made its way to me. I do not know anything else on William Howick, however I will see if I can find anything on him in the future.

It should be noted that the Gloucestershire Regiment cap badge to the side of the cap is an original period replacement. The Westcott HG did use the cap badge of the Gloucestershire Regiment, and I assume the one on this side cap was either lost or taken off when Home Guardsman Howick stopped service with the Westcott Home Guard. It is uncertain if the back badge is original to the cap, or not, but apparently the holes were there originally so everything checks out. If either badges are original to the side cap or not, they are both original period and show how the cap would have looked in WWII when it was being worn by Home Guardsman Howick.

Overall super nice side cap attributed to a man who served with the Westcott Home Guard in WWII and has on it the cap badge and back badge of a famous British Regiment. I hope you have all enjoyed as always, thank you for reading.