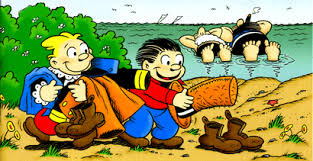 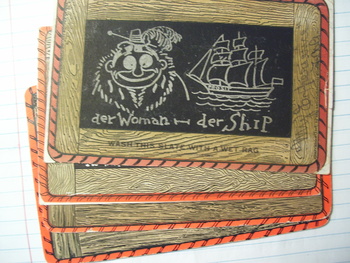 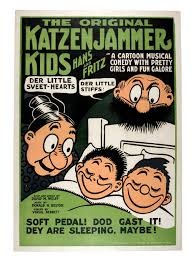 OMG,NOT AGAIN! Yes, I answered an ad for "Scrap postcards" This time over 2dozen cards in VG to great condition arrived. Uncut--Mostly 1906 undivided back comical.(originals sent, stamped and mailed, or unmailed.
Here is where I am REALLY glad I am old. See the card on top of pile(#2) of a genre sent along in the over 2 dozen..
.4 of these kind only. Anyone?? Recognize somebody!
My grandma read the funnies to me in the newspaper every Sunday moning (colored cartoons ) but she always balked at the one that featured this cartoon character. Why? Because she had trouble pronouncing the German Dialect.
What Strip.??? I saw it right away!! The Katzenjammer Kids!! *******postcards photo #2***********
MY postcard card depicts MAMA KATZENJAMMER Her twins were the really tricky-bad boys Hans& Fritz! And The dad was the ship captain.. ("Captain or Papa")The "kids" were always doing him wrong!
This is marked on back a" Magic Slate SUPPLEMENT-The HEARST'S BOSTON AMERICAN" postcard 1907 (undivided back) Maybe sent along inside the newspaper as a give-away?? This cost to me figured in with all the other great stuff? 50 cents.( I won by mail 26 wonderful, mostly 1906-07-- very good shape comic cards that were advertised "for scrapbooking" ) OMG! More of the whole cards will go on ASAP

Collectors know KATZENJAMMER KIDS are very desirable and this is probably as rare as hens-teeth-- If I didn't save it to be cut up for scrapbooking it would have been lost forever..
The Katzenjammer Kids is an American comic strip created by the German immigrant Rudolph Dirks and drawn by Harold H. Knerr for 37 years (1912 to 1949) I am holding 1907
!With MAMA KATZENJAMMER!( and the Captain's ship)

This card was to be wiped with a damp cloth(Magic Slate) to reveal something but it either is already revealed--plus I don't want to dampen this!!