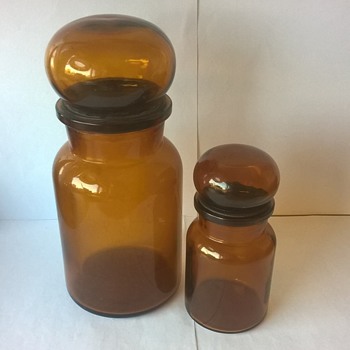 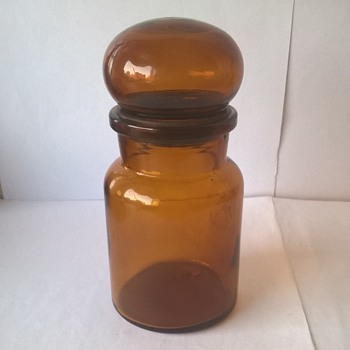 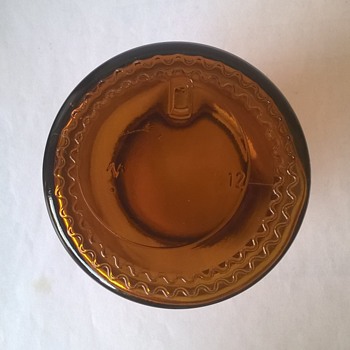 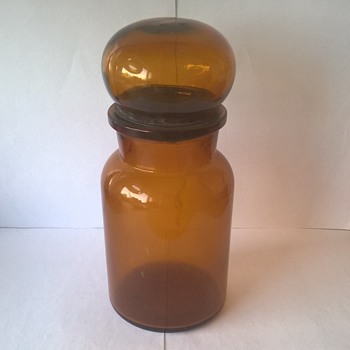 So this type of jars is apparently most commonly referred to on eBay and similar sites as "Belgian" or "Belgium" apothecary jars; usually there is a stamp saying "Container Made in Belgium" on the bottom, which both of these lack.(I've included only one picture of the bottom of these, because they are the same, and the larger one is much less readable.) Possibly they didn't include this mark on jars made for the Belgian market?

These jars are machine-made amber glass jars with bubble lids. The lids have a rubber cover to provide a seal. The biggest one is about 21 cm tall, the smaller one about 13 cm, lid included.
I'd say they're about 1970's-1980's? Again, I don't know nearly enough about this to date them with any sort of certainty. They are a fairly common find here in Belgium, and I don't think they're particularly old nor particularly valuable. However, they're extremely decorative if you're into the laboratory/apothecary aesthetic, which I most definitely am :)

I also have no idea if these were ever actually used to store anything medicinal/chemical or if they were just unusually shaped canning jars, but as they are most commonly are referred to as "apothecary jars" I put them under medicine bottles.