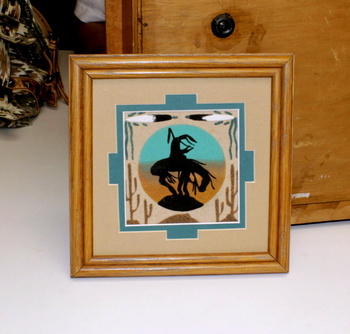 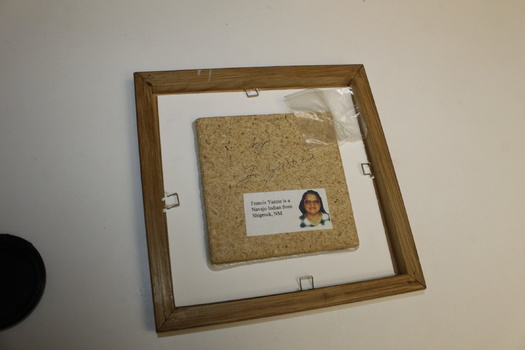 I am ecstatic that I found this sand painting of End of Trail. I never turned it over to find the artist...it wasn't something that I felt was important at the time. It wasn't until I got home that I turned it over to find that not only was it made by one of the best of the best in Navajo names, it's actually signed by her. Francis Yazzie! I got so excited and still am. This is and will be one of my favorite pieces that will be treasured for many years to come. It's small in physical size, yet mighty and very powerful to me.

As a small child, one of my grandmothers had a statue of this in bronze. I would just sit and stare at it in amazement and wonder, feeling a special connection to the significance this image holds, yet not knowing why.

I now know the answer to my wonderment. In my late 20's I found that I had a grandmother, one I unfortunately never met in person, yet have an awesome connection to in spirit, is listed on the Dawes List as Native American Cherokee Indian, by blood.

This amazing symbol of the Native American was created by James Earle Fraser in 1893, and get this, his first sculpture of it was...in bronze! He was not Native American but grew up on the Northern Plains in America.

The piece depicts the belief in spirit, shown by the wind blowing the mans hair and the horses' tail and mane and strength by his muscular body, of the Native American Indian, for all of the Tribes.

In 1901 Fraser completed his first commission, the Saint-Gaudens Medal, for the Pan-American Exposition in Buffalo, New York. This work helped to establish the artist and brought further commissions, including his most famous piece, a monumental version of The End of the Trail created exclusively for the 1915 Panama-Pacific International Exposition in San Francisco, California.

Enjoy,
Love to all!