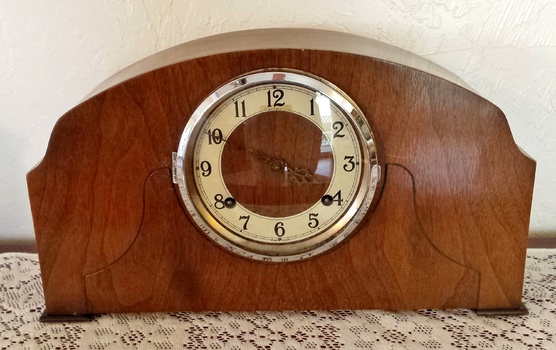 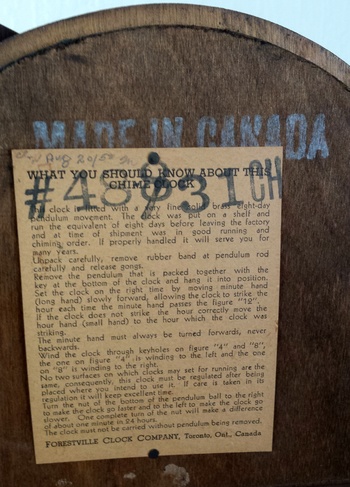 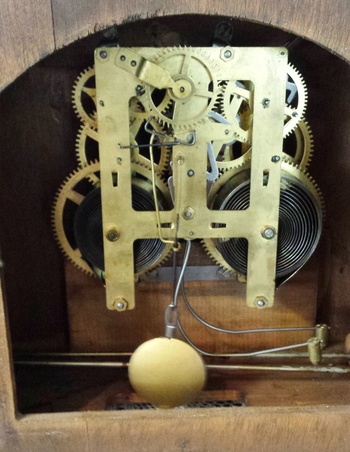 I bought this clock locally today for a very reasonable price. The woman who sold it was moving across country and was trying to lighten her load. She appeared to be about 65 years old. She told me the history of the clock. She inherited it from her Grandmother who had lived in Nova Scotia. She told me stories of seeing the clock as a child in their home when she visited and had many fond memories of it.

The condition of the clock seems to be quite good. The only problem I saw was that the hinge had broken off the lens bezel. I believe this was the main reason she wanted to sell it. As soon as I got it home I broke out my soldering gun and attached a special flat tip that seemed to be made for this type of work. The hinge is now sturdy and ready for many more years of operation.

I have not serviced it yet but I did test if for 2 hours and found it to keep fairly accurate time. It has a nice bim bam sound that strikes on the half and full hours. The case seems to be in very good original condition considering that it's over 60 years old. The clock is marked "Made in Canada" but the movement is marked "Made in USA." It appears to be the original movement to the clock so I suppose they were sourced out during assembly. Overall I am very happy with my latest purchase.

I found a link to the Canadian Clock Museum website which allowed me to verify the approximate date of manufacture. As per the info in this link... http://www.canclockmuseum.ca/Canadian_Makers/Blackforest_Clock_Company_and_Forestville_Clock_Company.html

"Black Forest Clock was changed to the Forestville Clock Company in 1941. During the war years this company imported its clock movements from England, the United States, and even France. However, starting in the mid 1950s German factories again became the source of most Forestville clocks, with Mauthe being a major supplier." 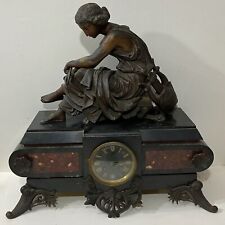