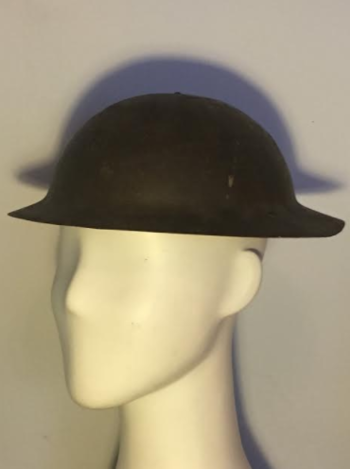 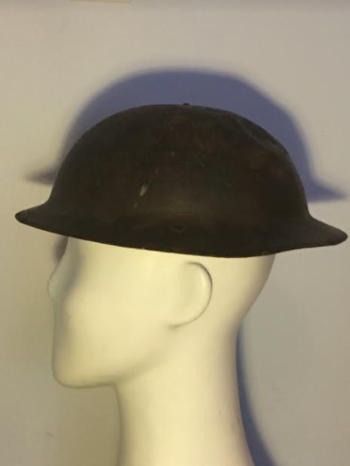 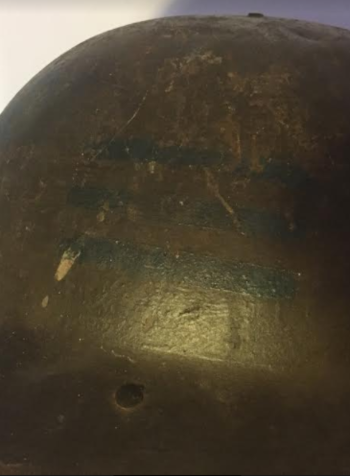 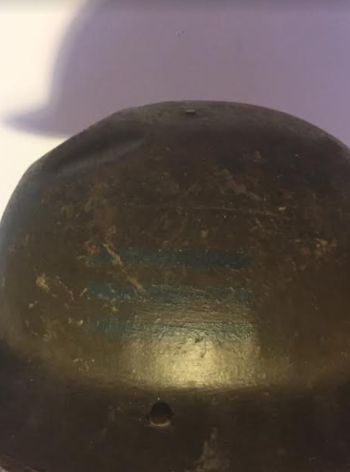 The helmet is in pretty good condition despite its age, but does have some damage. It should be noted that this helmet was found a few years ago in a Barn in Scotland, and has been there likely since the War, or at least for a long time. The helmet has some dents that could either be from it's bad storage in the barn, or perhaps from its service in the trenches. The helmet is quite dirty from being in the barn for all those years.

To either side of the helmet are 3 horizontal blue bars, division markings. They are in good condition despite their age and still vibrant in colour, whereas on some WWI div marking helmets the colours have faded or changed overtime. The division markings identify the helmet as 4th Gordon Highlanders, 153rd Infantry Brigade.

To the interior of the helmet, the liner is still present but is unfortunately detached and is in bad shape. I keep it in the helmet at all times, but unfortunately the liner is constantly crumbling due to all the years in the barn, I am just happy it's still there at all. There is no chinstrap, probably disintegrated long ago. The helmet is not named or dated but does have the steel maker's marks, I believe HS 110, HS for Hadfields, the maker, and 110 the batch number.

As I've said many times, this helmet came from a Barn and Scotland and has been in there a long time before making it's way into a couple collections and now finally mine. The helmet also came with an original WWI gas mask that is not in the best condition, but consider it was in a barn for almost 100 years it's in good condition for a gas mask in that situation. I may post the gas mask at a future date, although I don't believe it can fit on a mannequin head display as one of it's straps is broken, although I'll see what I can do to mount it on a headgear display eventually.

Despite it's "okay" condition overall, pretty good shape considering it's age and time in the barn in Scotland. Overall nice and very rare helmet to the Gordon Highlanders, a famous Scottish regiment.