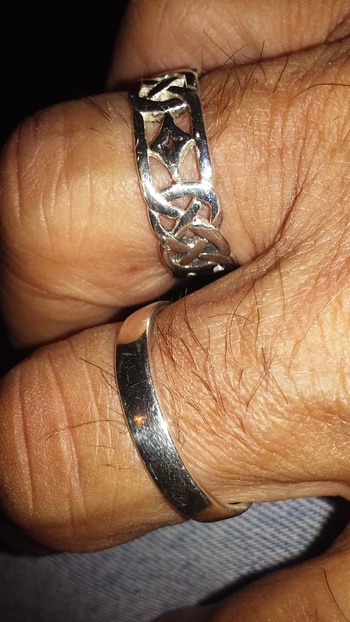 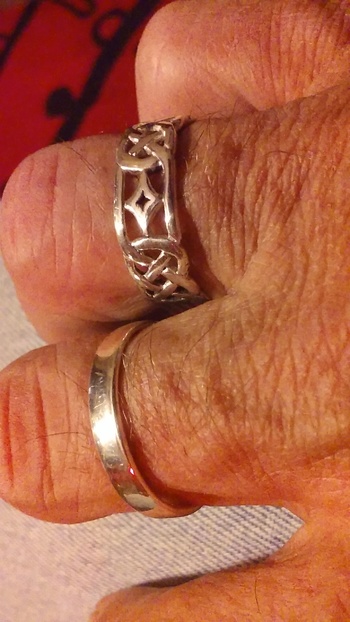 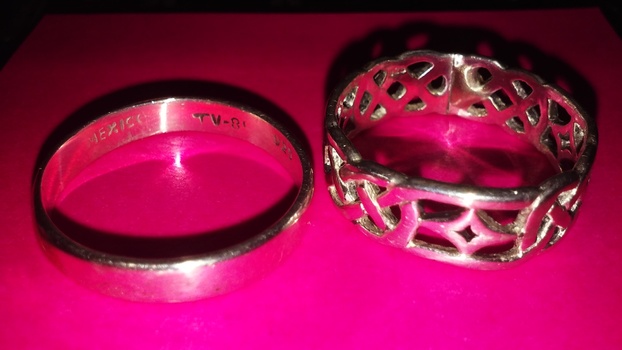 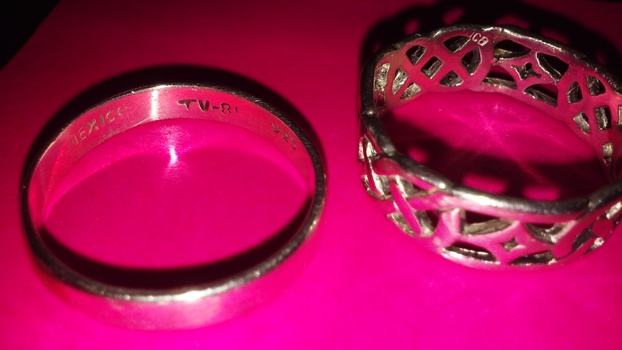 I wear these basically 24/7, and have done so for years. Over that time, the poor things have been terribly abused (at work mostly, but home too) and for the last few yrs (at least?) both their original 'seams' had broken open leading to even more 'bending and re-bending events' etc. etc -- in fact the fancy one was nearly broken in two at a second place.

Anyways. Yesterday, after having again come across the remains of a small gold ladies' ring (which I found laying in a parking lot awhile ago, after it got run over and crushed by a car...still better than picking up a penny?) I stopped into a little jeweler's shop I'd spotted near the house, to ask about it and/or whether it actually had any particular value.

Ended up finding two quite "interesting" dudes that run the place (not really at all what one might expect of the stereotypical 'jeweler') one of which (as I noticed after a few minutes of conversation) was actually open carrying his firearm. (!!) And, it turns out the gold ring was worth roughly 30bucks -- OR -- an 'even trade' to repair my silver rings. SOLD! (well, "traded" I guess, but whatever...??) 30mins later, my fingers were newly shiny! <lol>

I bought the small plain band from a streetcorner vendor somewhere in downtown Boston, MA in 2000. Despite that, it is marked "MEXICO" on its back along with "TV-8[something]" and a "925" silver designation.

I actually found the fancy one (jeweler dude called it a "celtic" pattern and wondered if it was something called "saw cut"...he seemed to like that one a lot!) in the desk drawer of a room in an otherwise *dreadful* motel (that unfortunately featured a particularly noisy late-nite "bar" as its centerpiece) in Sarasota, FL in 2003 along with a couple other interesting rings and a handful of Canadian coins -- apparently previous "tourist occupant" of the room was a little too hung over when checking out and forgot to grab 'em. (such a shame, that... <lol>) Its only markings are a "CB" (maybe C8?) and a "925".