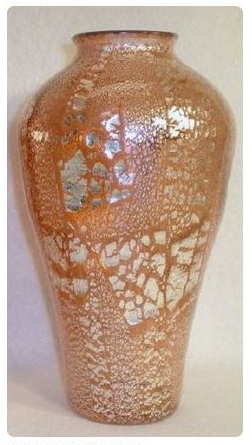 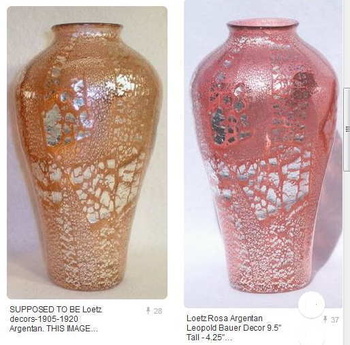 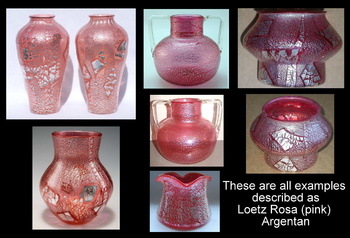 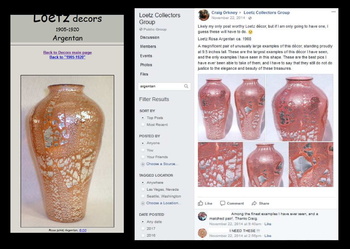 So I have written on more occasions than I can count, and in many different forums regarding bad information that can be found on the internet, and how collectors and sellers should always vette sources if possible, before regarding them to be a source of reliable information. In the age of Pinterest boards and armchair experts, there may not be a more perfect example of what I am referring to.

In the process of doing a Google search the other night, I found myself staring at an interesting post regarding some vases. First, let me point out, for those that are not aware, these are my vases in my own personal collection, and that my Argentan examples are solidly confirmed as Loetz Rosa Argentan…… There is no doubt about it…… and if I were to say tomorrow that they were for sale, my inbox would be full of emails from high end Loetz collectors around the world.

The post I was looking at was in a Pinterest board, professed by the user posting to it, that many of their boards were “research related”. This individual also claims to have an informative website about Czech glass.

So what I was staring at, was an older picture of one of my own Argentan vases, as posted on the old Loetz.com, and taken with an early digital camera. The image is not as color accurate as more recent images posted here. The difference seen in image 2 are the results of a $1500 difference in the price of cameras the pictures were taken with, and large technological advances in digital photography made in a many year period between the two photo sessions.

The old image of my vase was posted in a board titled “Repro Bohemian/Czech Glass”…. I was fascinated by what I found. The board owner had the following statement posted about the Pinterest board.

“The common denominator here is that each piece was made either, to copy valuable glass, such as Loetz or Murano, or to reproduce glass made elsewhere and fool the buyer, or re-introduce a glass style that is now vintage or antique. Made in several countries, over a long span after WWII. Often we find out because someone saw it sold new with a label somewhere recently. Descriptions are those of the image originator.”

Imagine how dismayed I was to discover that the vases I own, verified as Loetz Argentan by some of the best authorities on Loetz in the world, were actually now revealed to be reproductions… by someone posting on Pinterest!! Image my disappointment to find that what were originally identified as world class examples of the décor, were now revealed by a Pinterest "expert" to be fakes….

Image 2 shows the old and new images of the same vase, in approximately the same position. The left example was shot indoors with a $100 digital camera. The right example, also shown on the pinterest board, was taken many years later with a $1500 camera in outdoor sunlight. This was seemingly done to show how the image had been manipulated to make it look different that it actually was. Obviously the better image was the one that had been manipulated.

Image 3 shows my Argentan pair in the upper left, along with several other examples of Loetz Pink Argentan vases. These examples are from both my website, and also found on the new Loetz.com. This image shows not only other examples of the same décor, it also shows the extreme differences that can appear in photographs. This image highlights why understanding glass and being able to identify decors, sometimes in spite of questionable photography, goes a long way in collecting and researching.

The following statement is made on the board regarding the first image:

“SUPPOSED TO BE Loetz decors-1905-1920 Argentan. THIS IMAGE VERSION IS THE REAL UNMODIFIED GLASS COLOR OF A PAIR OF THESE VASES, BUT CANNOT BE LOETZ IN THIS DECOR.OR SHAPE.”

Considering the fact that this individual has never seen or handled these vases, I am not real sure how they came upon their “information”.

My reasons for posting this are pretty simple.

1) Anyone can post anything on the internet and say what they want about it. That does not make it true, or even close to accurate. Everyone should question information they see, especially if it relates to their area of collecting. Collecting is fun. Being an educated collector does take some work.

2) Information such as this, if believed by someone that just trusts the source without realizing how much, or how little, they actually know, would put themselves in a situation of possibly not buying an example of a Loetz vase in this rare décor (or any other item they were misinformed about) if they ever saw one, believing it to be something it is not.

3) Information posted on the internet by any individuals should always be vetted, unless that source is known to you, or known to be a reliable and well researched source.

Collecting and learning can be very fulfilling, and good accurate information is invaluable…..

Make sure the information upon which you base your collecting, is worth your trust…. No matter how good it appears to be….