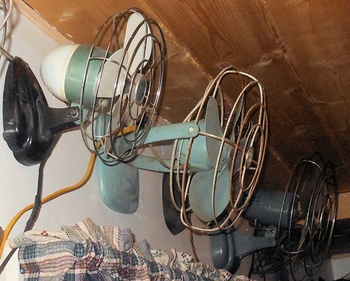 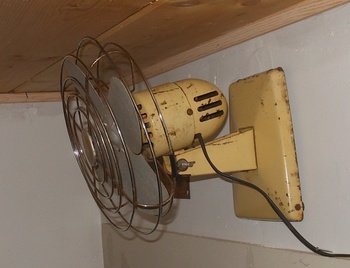 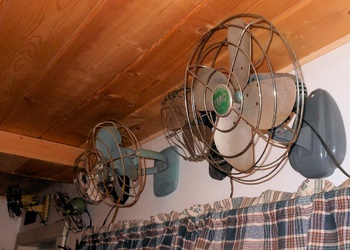 This is a little project I have been working on this week. I took down all the folk art bird houses and replaced them with vintage electric fans. Most of the old electric fans have mounting points so they can be placed on a wall.

As this is drywall I used my lighter fans from the 1950s. In the 1950s they tended to use stamped metal instead of cast iron especially the drug store fans. Three of the seven fans are Bersted fans. Those were sold under a variety of brand names. The fans above the window are flanked by Kwik-Way Go Anywhere fans. There are also two GE fans.

The largest Eskimo (Bersted) fan has drywall anchor. This is down in my build-up/basement area. The older fans are upstairs. Downstairs is midcentury modern and upstairs is more the antique era (yes I know about the 100 year thing). Now back to our regular programming.