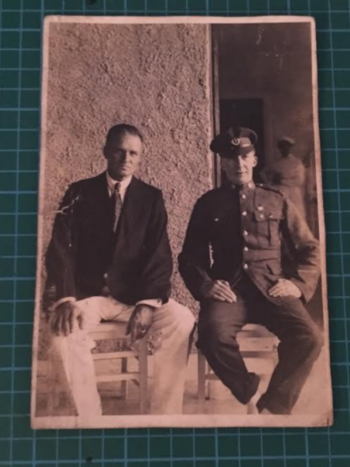 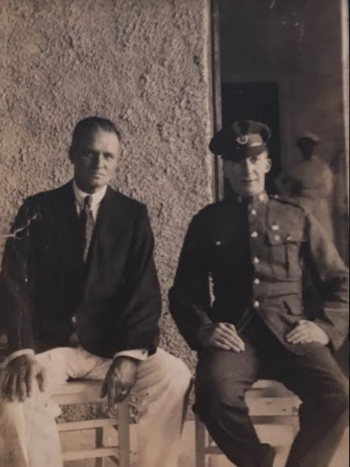 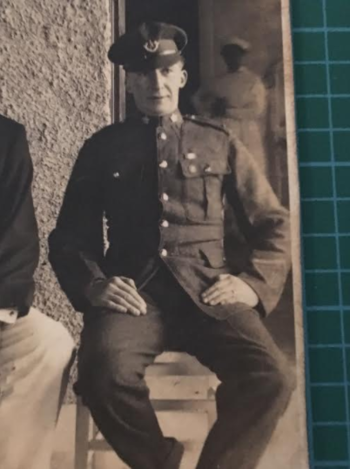 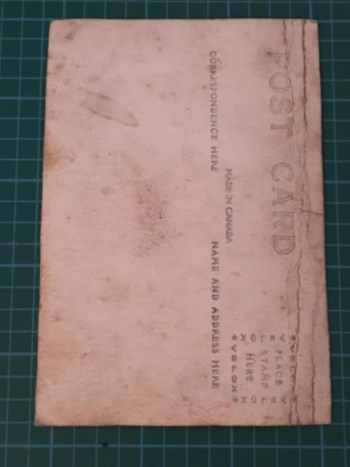 A nice WWI period original post card photograph of two men sitting, one in a suit and one in military uniform. The man to the right of photo in military uniform is a Canadian Soldier and is wearing a WWI other ranks' Service Dress tunic and trousers. The tunic has a 1914/15 star ribbon bar on it, meaning the soldier had been one of the first lot to arrive at the front. He has two maple leafs on his collars. What is most interesting is his trench cap, which sports a "Little Black Devil" the symbol of the Winnipeg Rifles and their cap badge. This soldier was no doubt in one of the numbered battalions that are perpetuated by the Winnipeg Rifles. The maple leaf collars make be believe that this soldier isn't in the 8th Battalion CEF (who would have had "C" over "8" collar badges), but perhaps one of the other battalions perpetuated by the Winnipeg Rifles, such as the 190th, 203rd Battalions, etc. that used maple leaf collar badges with their battalion number on their collars.

Beside the Winnipeg Rifleman is a man in a period suit, tie, and white pants. He appears to be pretty well dressed. If you look carefully he is also wearing a ring (may be hard to see when not looking at it up closely like I did) on one of his fingers. I can safely assume that this man is a friend of the Winnipeg Rifleman, or perhaps a family member or acquaintance at least. There is a very slight tear of the photograph to the edge of the photograph on the man with the suit's arm.

I believe it to be a hospital setting as in the background you can spot a nurse. Of course, it could be another location but because the nurse is in full uniform I believe this may be a hospital or field hospital. I am not sure, but it also appears as if the Winnipeg Rifleman is not wearing shoes, and is bear foot?? If so, I find it very odd that he would be bear foot while randomly walking around, so perhaps he was recently discharged from the hospital when this photograph was taken. I have tried my best to speculate on what is happening with what is provided in the photograph.

To the back of the photograph it says "POST CARD", "Made in Canada", and then gives instructions about where to put your correspondence and stamp. There is some light staining but this side is in pretty good shape. There are no names, writing or dates written on the back of this post card photograph, however this is WWI period.

Overall a really nice and original old photograph post card of a Winnipeg Rifleman and a man in a suit sitting in what I believe to be a hospital setting. Only one slight tear to the photograph, and some light staining on both sides.

I kindly ask that this photograph is not copied or reproduced, especially not without my permission, it is an original period post card photograph that I have bought for my collection.

I hope you have all enjoyed this post, thanks for stopping by.