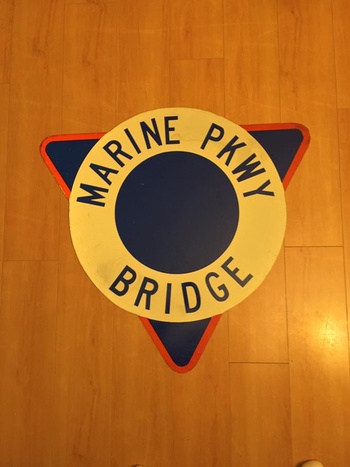 This is an example of a rare, 1965 Marine Parkway Bridge shield sign from New York City. It is one of several directional signs that point the way to major crossings in the area. In the mid-20th century, new signage implemented by city officials provided ease to daily travelers by shape and color scheme. Certain spans were represented as triangular signs with three typical colors, in which consisted of red, blue, and white.

In regards to the Marine Parkway Bridge directional sign, its design was identical to its twin, the Cross Bay Bridge (today officially known as the Cross Bay Veterans Memorial Bridge) in Queens.

Built in 1937 as a vertical liftspan, the bridge connects the borough of Brooklyn and the Rockaways. It was renamed in 1978 as the Gil Hodges Memorial bridge, in memory of the late Brooklyn Dodgers baseball player.

The sign is considered new old stock, so it never saw service on the streets of New York City as originally intended. That said, it is essentially in perfect shape for its age.