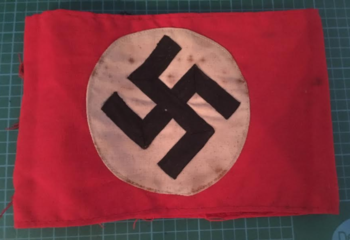 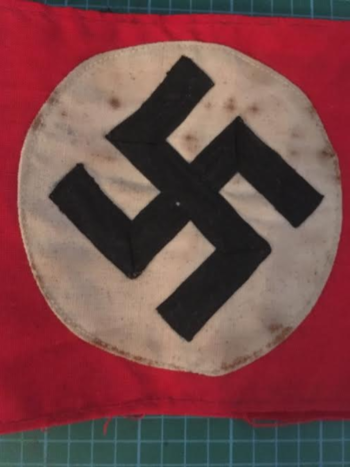 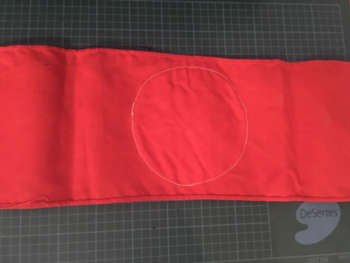 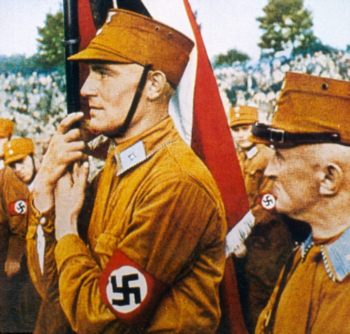 *NOTE* This is being uploaded strictly due to historical interest. I mainly collect British and Canadian militaria, however that being said, I do have a interest in history in general and I do collect the odd WWII German item. The Nazis were the "bad guys" of WWII. Despite their bad rap in history, they had extremely nice and well made clothing and headgear, probably the nicest any nation made during the war. Despite me saying this, there are certain people that do not understand what collecting is and will be offended by just looking at this armband. As I said, the Germans get a very bad rap for all the things that went on, many terrible atrocities, but in war all sides commit atrocities. I am not in any way shape or form defending anything bad that the Nazis did, but everyone seems to look the other way at the millions of people killed by Stalin and the Bolsheviks. This is often overlooked because they were with the "good guys." A large percentage of the Militaria collecters collect WWII German Militaria, everyone wants a piece of this unique but terrible history. Some people think no one should even be allowed to own these items. If we start to censor and destroy these objects, we start to forget the history. And those who forget history are bound to repeat it. Anyway, I don't mean to offend anyone by posting this object, strictly historical interest to a unique past.. Anyway, let's get to the object at hand.

This is a very nice original WWII period German NSDAP armband. The Armband is in good condition for it's age with no tares and only minor staining on the white circle part of the armband. The armband is red with a white circle that sports the symbol of the Nazi regime, the swastika. The armband is a 3 piece construction and is very well made. To the back of the armband is white circle that is the back threading to the white part of the circle which is the 2nd layer of the 3 piece construction, the 1st layer being the red band, and the 3rd being the Swastika itself. The arm band can be neatly folded or spread out to be put on. It would have originally put on the left arm of the wearer, and worn at all sorts of events including the infamous Nazi rallies. For all I know, this very armband could have "seen" the Fuhrer himself, or been present during one of his speeches to the German people. I believe this armband was originally worn by a member of the NSDAP (National Socialist German Workers Party) - or the Nazi Party, but this pattern of armband was not only worn by the NSDAP but also by the SA, NSKK, RAD and numerous civil agencies. German items are mass reproduced and notoriously faked, as they fetch very high prices for even common items. This armband came from a credible dealer in Inverness, Scotland and was apparently a war bring back. I also had this armband checked out by experts on a forum and this is no doubt an 100% authentic piece, but even without the credible source or the experts, I already knew when I first received this piece in the mail and held it for the first time that this was the real deal. The staining and worn look to it, I am almost certain it has seen historical events unfold, and was probably worn at a few rallies, though one can only speculate. All I'm saying is who knows what this armband has witnessed! Overall a fantastic condition original German WWII Armband.

The last picture is a picture I found on online to show what this armband may have looked like while on the uniform of a NSDAP member. It would have gone on the left arm of the political khaki uniform of the NSDAP member, or a member of another civil organization of the Reich.

It may seem very odd to some of you, but I really like this piece as a piece of history, not what it represents, but what it has seen unfold. The fact that it once belonged to a cult like group that for a few years had control over much of Europe, and even had a shot at world domination. A symbol that once held so much power and authority, that once struck fear into the enemies of the Third Reich, now utterly powerless, sitting and collecting dust on my shelf.

I have very few WWII German items in my collection, as I said I mainly collect British stuff, but I may do some more WWII German item posts in the future. As always, I hope you have enjoyed this post. Thank you for stopping by!