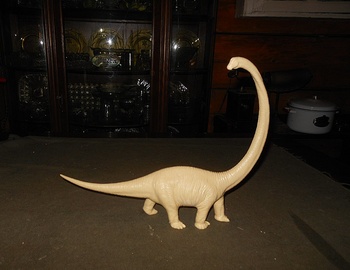 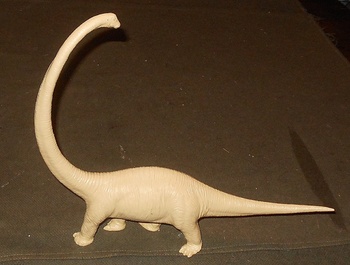 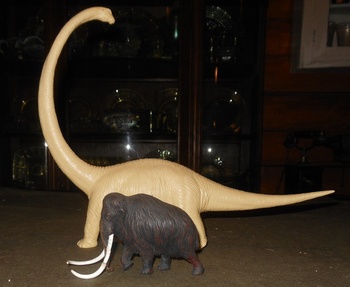 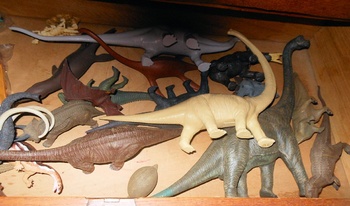 This post is has two facets, the toy and the actual creature. I think I will start with the actual creature.
The main feature of this dinosaur is that it had the longest neck of any creature that ever lived. It was close to 50 feet long. There is conflicting information so have to average and guestimate.
It is thought that it would not have been able to raise its head high due to the strain on the heart. But other animals with long necks have valves that keep blood from flowing down when the head is raised. This creature could have reared up to reach high branches according to me.
The neck had bones to support the neck along the underside of the neck suggest the neck was always in a straight line so the model here is unlikely but possible.
OK on to the model this was made by Invicta in the late 1980s. These seem to be based on the Marx dinosaurs for the solid color molding and style. This was the first time since the Marx dinos of the 1950s and 60s that there had been any serious attempt at toy dinosaurs. There are some inaccuracies such as the elephantine feet and skin.
Safari Ltd and other companies started making painted versions in the 1990s so this line went extinct but I believe this line will be a collectible of the future.
The Wooly Mammoth in photo 3 is the same scale and part of the same line. Photo 4 is drawer where I keep them. I painted most but I think I will get some in the original condition.