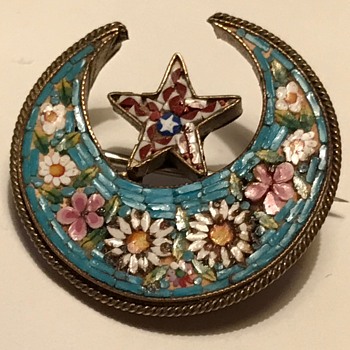 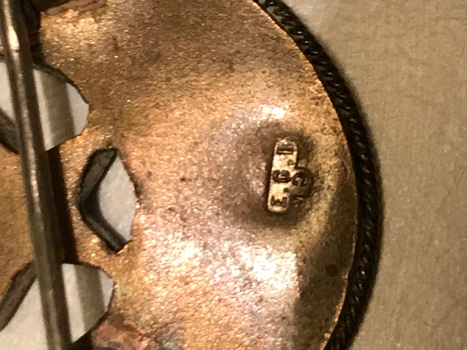 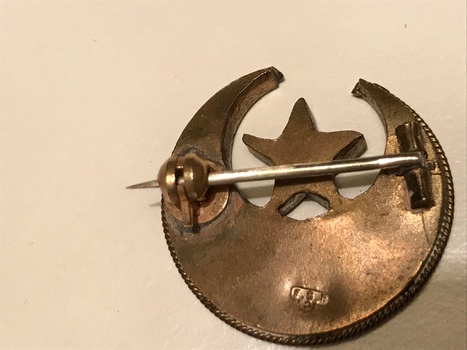 This micro mosaic brooch was inherited in the family 1953 from a great grandmother in Sweden. The owner was a dedicated methodist and went on pilgrimages in Europe and Israel. It's a lovely brooch, with an unusual combination of motifs to me. The diameter is approximately 20 mm and the materials used are probably brass and glass.

The motif is beautiful, but puzzled me, because I immediately connected it to islam and the ottoman empire. That is not what I expected to be in the possession of a strictly christian woman. I began searching Internet for similar brooches and quickly realised that it was a very common victorian era symbol as well.

I interpret the makers mark as E.G.B, which I only found one - Ernst Gideon Bek - from Pforzheim, Germany. The Bek company manufactured Jewlery between 1897 and 1945 and had filials in England, Canada, USA and India until 1914. During the first world war, all goods outside of Germany was confiscated and Bek was forced to sell the goods to the neutral countries in Scandinavia, Switzerland and the Netherlands. After the war he focused almost exclusively on mesh purses and handbags, which turned out to be a bad decision. The purses went out of style and with the economic depression, the company was almost put out of business. Bek suffered a stroke in 1934 and left the company to his sons. The headquarters in Pforzheim was destroyed by allied bombings in 1945.

Looking at the hinge and the clasp, it looks like the clasp has been replaced, since the soldering paste has a different color under the clasp than the hinge. The hinge is of a "tube" type, which was used primarily between 1850 and 1930. The clasp looks to be more modern and machine made.

I appreciate if anyone can draw any conclusions on where and when it was made.