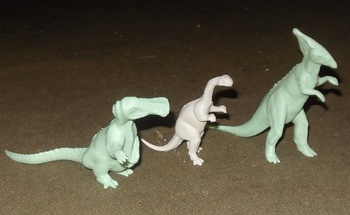 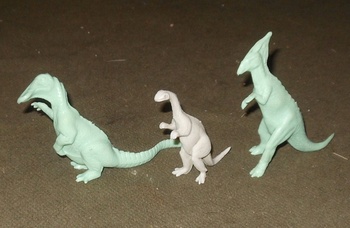 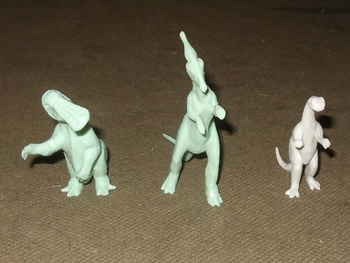 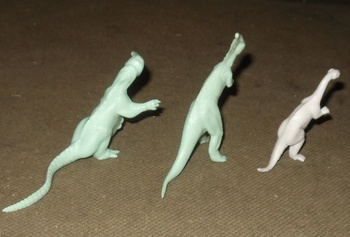 Marx Toys started making their dinosaurs in the 1950s. They probably were not the first company to make toy dinosaurs but they set the way and style for how dinosaur toys were made. The poses used by Marx were copied repeatedly.
As this set includes Parasaurolophus, that is the one with the crest, it would be from the mid-late 1960s. Also it is from a playset or a bagged set. The dinosaurs that were sold in the playsets and bags were molded in either green or gray. Half the dinosaurs were be molded in green and the other half gray. There were two carded sets that came with 8 dinosaurs each that were molded in different colors. I am not allowed to own the carded sets as I am too likely to open them up but I do have all the dinosaurs from them to be posted eventually.
The figures are from about 3 1/2" tall to 2 1/2" tall for Plateosaurus. They w2ere copied for years and are possibly still being copied. Always they are copied badly.

As for the dinosaurs Hadrosaurus is the duck billed dinosaur. It was the first dinosaur skeleton reconstructed back in the late 1850s. From the late Cretaceous period as is Parasaurolophus. Both were about the weight of a smaller elephant but were bipedal (mostly).
Plateosaurus is an early sauropod ie the Brontosaurus type dinos. Check the small head and long neck although it was completely bipedal. It is from the Triassic period was the first of the age of dinosaur. It was the first of the well known dinosaurs. They were from 20-35 feet long.