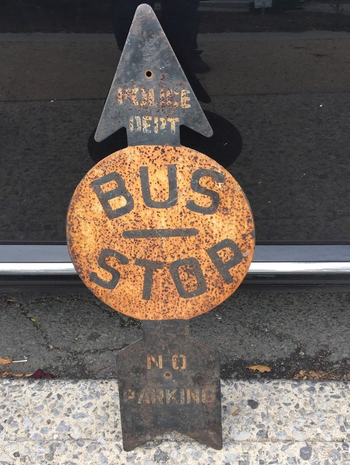 From around the 1940s, this sign originally came from the city of New York. It was common for a time to see signs of this type mark bus stops in various areas of the city. Arrow signs in New York City are ancient in the history of sign design, as they were first implemented in the 1920s to provide motorists with clarity of direction and street rules. At the time the sign was produced, the New York Police Department oversaw traffic control citywide as evident on the sign itself. It would not be until the year 1950 that New York City's first Department of Traffic, founded then by Lloyd B. Reid, would replace the Police Department's responsibilities in traffic control permanently.