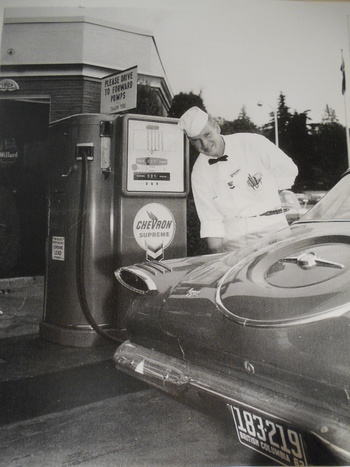 Here's a picture of my Dad in 1962 pumping gas for Chevron. I've found and collected from other family members a few pictures of him and is all that remains in memory of him. The pump says 45 cents/gallon. The car i'm guessing might be a Signet. He looks a little messed up having just recovered from a bad motorcycle crash the year before having not seen a big old Chrysler stopped at the light (probably drunk) (family secrets ya know) he rear ended it with his Harley 45 and went through the back window and landed on the the front seat. Ampicillin saved his life, and possibly the 'Marlon Brando' studded leather outfit he was wearing had some beneficial effects. Very soon after this pic my older sister was born. Within a year he had started his 40 year career with the fire department.