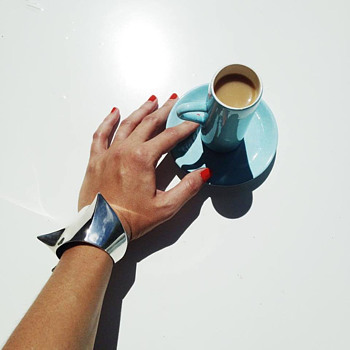 This cuff is a hollow form made By Frank Patania Jr (1932-present) around 1960-1965). He originally made it for his first wife, Gail Patania, who wore it for many years until it was accepted by the Smithsonian American American Art Museum for their permanent collection. The Patania family, Frank Sr, Frank Jr and Sam have all had one cuff each accepted by the Renwick gallery int he year 2000 by the then curator in charge, Kenneth Trapp. This was following the Patania's Tucson Museum of Art show, " Patania's, a Legacy in Silver and Gold" which was a three generation show. The acceptance by the Smithsonian was the only one of it's kind for a family of artists with three generations being accepted at one time. This lifted the Patanias jewelry work onto a higher plain as art rather than silver or gold smiths or jewelers as far as the collector community was concerned.
Frank Patania Jr went on to make many ecclesiastical pieces for many churches around the United States and will be remembered not only for his jewelry but also for these large scale silver pieces.