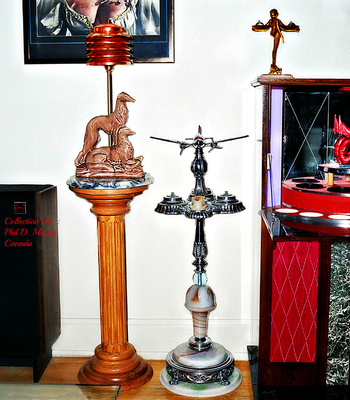 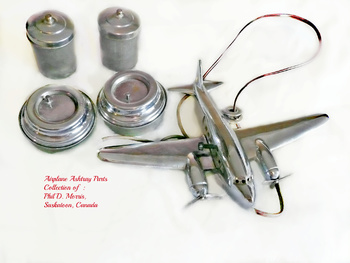 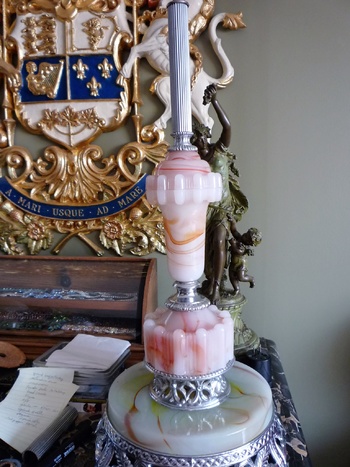 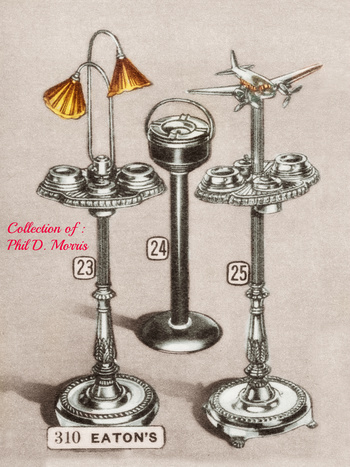 Airplane Ashtray Stand With Pipe Holder, by Metalcraft Mfg. Co. Ltd Circa 1953 _ The last photo shows the first ad in an Eaton's Spring and Summer Catalog of 1947, which I own, showing their first airplane advertisement !! At least one of their first advertisements. Pictured with it is what they called a twin light smoker !

The first pic is dated 1986 or so, when I also had an apt in Regina, even though I had one in Saskatoon also. The First photo shows the Very Rare Airplane Ashtray with the pipe holder still in perfect shape - usually they are broken or chipped and luckily this was my first time I bought this and it was not broken. If it was broken you would have to get another different tray as there are so few of this particular tray ! This one has extra height and is about 40 inches high. The white onyx glass cone shape is rare also as they usually only come in green, and though I have seen hundreds of these parts, this is the first brown striated one I ever have seen. The onyx/glass slag glass is of the best quality and all parts light up. The airplane has a red bulb in it also. This very ashtray was photo'd for the first book on smoking/ashtray collectibles in 1989, if I remember the year right !!

I know a lot about the history of the company - founded by the Shapiro family in about 1946 or 47, right after WW2 ! Some are marked Electrolite, but that must have been a subsidiary of Metalcraft, and I have talked to owners, son/grandson and the name Shapiro is the same so it had to be the same company. The person (son) I talked to last was born after the company closed so he still thinks that Electrolite was a separate company, but there are too many similarities and also a rare fact known is that first and last name people worked at both companies. Apparently the company also was known as the Rainbow lamp company. The floor ashtrays were only made in Toronto in North America. At first they were made in all chrome as the last photo shows, but in about 1950 they started adding some beautiful slag glass parts (glass/onyx) which they did a simple lighting effect. I have learned how to even sodder lights together with no bulb holder, just so they will look incredible !!~