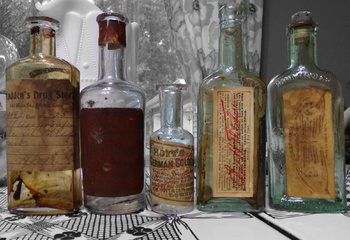 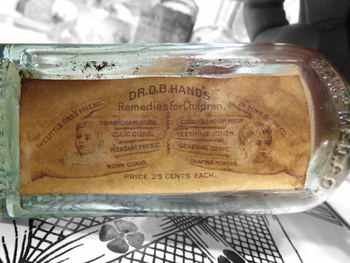 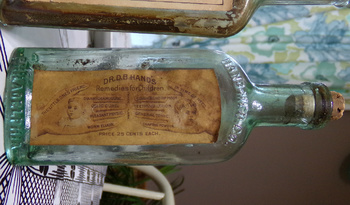 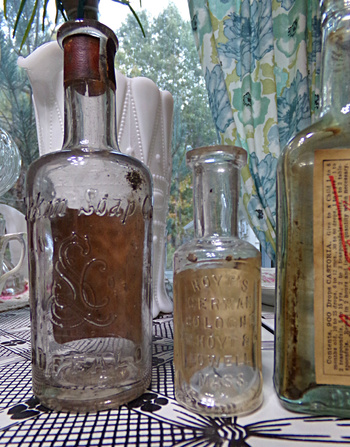 On eBay not long ago I was looking through mostly disinteresting (to me) and over-priced (even to the seller) labeled bottles, trying to find something good at a price I like. While I already have two labeled Hoyt's Colognes and a 1880s trade-card for them, the Dr. D. B. Hand's Remedies for Children stood out in this lot.

I knew of the bottle from almost bidding (it soared way above what I was willing to pay) on one before. While not rare, with intact label the pre-FDA (pre-1906) ones are of fair value, selling for what I paid for this lot and then some.

They pretty much all look the same. I've seen only one other label on the older ones. It looks like D.B. Hand's Remedies for Children started in 1885. The newest ad for the company I saw in Google Books was 1915.

Word-for-word, the words on my label match an 1894 ad. Around 1906-1907, I assume 'Colic Cure' would have changed to 'Colic Remedy' on the label, as 'cure' vanished from 95% of bottles when the Food and Drug Act took effect and enforced its regulations by the late 00s. (I've seen only 2 1910s-1920s bottles that promise to cure certain diseases).

As for the other bottles, a Pitcher's (not Fletcher's) Castoria Oil, a Bay
Rum cologne from Larkin soap Co., an 1880s-1890s Hoyt's German Cologne, and a Madden's Drug Store from Bristol, Connecticut, in early 1907. All were in the lot.