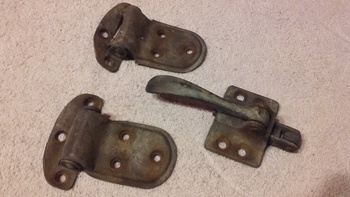 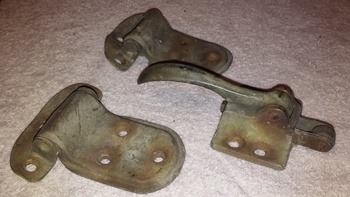 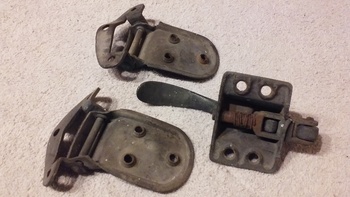 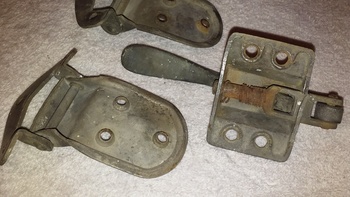 Here's another "barn find" from a couple months ago. While glancing around a corner of Grampa's old barn looking for a couple small chunks of junk wood to start a fire, I noticed an oddly squarish chunk of wooden something laying face down in the dirt. Kicked it over (which, in turn made it mostly fall apart) only to discover this hardware still (sorta) attached to it, thus realizing it had probably been a little door (about a foot square?) originally from an antique icebox. (and by that, I do mean *icebox*, not "refrigerator*...)

So, I naturally picked up the pieces, so to speak. ;-) The wood was long since all toast (not even good for the fire) so none of these required much more than literally picking them up -- the (steel) screws which had held them to the rotted wood having likewise mostly rotted away. Presumably these parts are made of (once nickel plated?) brass, since they didn't rot away too. The 'door handle' in fact still does have the remains of a rusted steel (former) spring as part of it.

Both hinges (and even the handle, at one small spot) show some physical bending damage that I'd think could indicate the door was somehow "forcibly removed" from its former cabinet. No idea how, why, or when that would have happened, or whether intentionally or not...apparently the icebox met its end in Grampa's barn anyway, one way or the other...there was no other remaining evidence of it anywhere else that I could find.