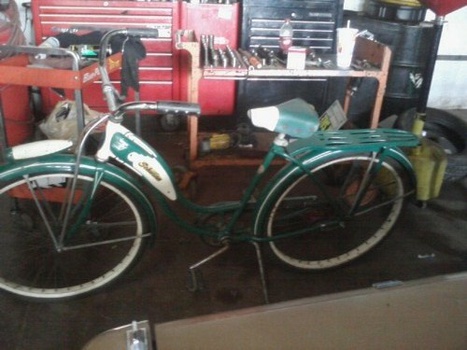 We have the 1950s Girl Schwinn Hornet. I have done alot of research on this bike and honestly its a bit confusing to me. I know that some records were destroyed in a fire. All physical signs of the bike seem to point to it being a 1951. It has a kickstand, which was introduced in 1948. It has a feathered chain guard, which was prevalent in 1938-1956. It is a Hornet, which was made from 1951-1958. And it has a DX style frame, which was used until 1953. I cant seem to find the serial number on any online stes, but it is E823615 and is located on the rear axle. This numbering style, one letter and six numbers is similar to the 1951 style. It is a 26" Girls Schwinn Model K65 Middleweight Hornet Tank Bike. It is Florida Green with Ivory trim. It also has the light, horn and rack. ORIGINAL TIRES, the Schwinn Westwind, this is the original tire from the Schwinn Dealer!