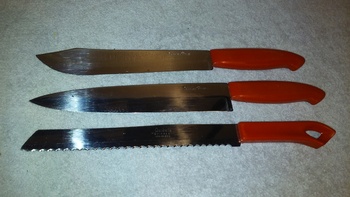 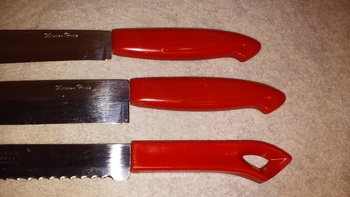 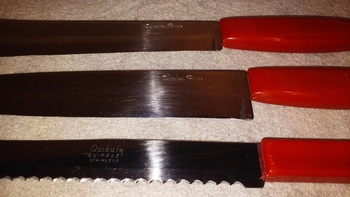 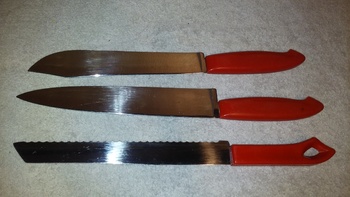 I spotted these three kitchen knives at the flea market, being instantly attracted to their bright red (plastic) handles. :-) [SO much more-funner than the '200 shapes of black' so typically found nowadays?!] All 3 are roughly 12" long and made of stainless steel.

The top two with smooth blades are stamped "Kitchen Pride" on one side, but no other markings. A little looking online leads me to believe they were manufactured by the CAMILLUS CUTLERY CO. of New York, probably in the 1960's or 70's.

The one with the serrated blade turns out to have a kinda amusing (to me, anyway?) potential history behind it. It is stamped "Quikut [reg] QUIKKLE STAINLESS" and was made by a company first located in Ohio that moved their production to Arkansas in 1964, right abouts the same time they decided to 're-brand' part of their product line and introduce a new 'sales strategy' for it -- the new product being the now ubiquitous GINSU KNIFE and the new strategy one of the predecessors of the also now ubiquitous "AS SEEN ON TV infomercial".

Guessing that this knife is of similar age to the Kitchen Pride pair, there's a decent chance it was actually made right here in my (adopted) Home State, where apparently both Ginsu and Quikut knives are still manufactured today. :-)