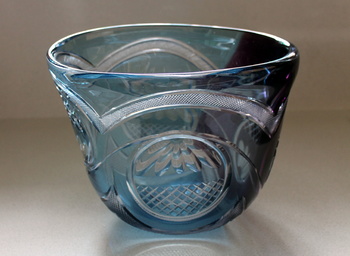 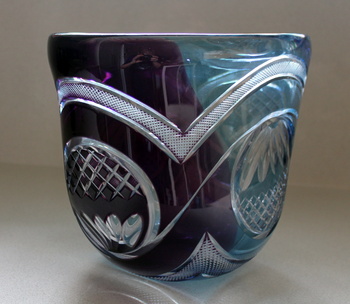 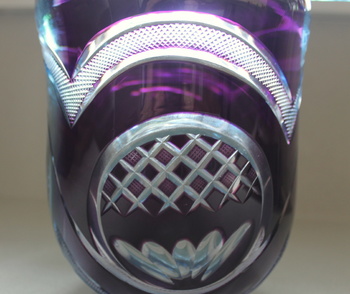 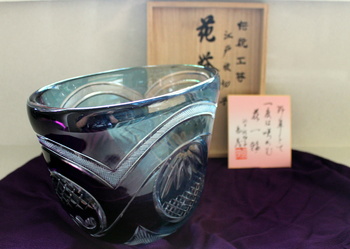 Edo Kiriko is a traditional form of Japanese cut glass from Tokyo, and has distinctive patterns and designs that are related to Japanese forms and traditions.

This is a very large piece by Edi Kiriko standards. Although it shows traditional designs such as the lotus and basket weave, it is modern in it's use of randomly placed differently coloured glass and by the very free form of the vessel.
I love that it involves two very Japanese design features; the acceptance of freedom in hand made objects and that they can be unbalanced, and the use of very symmetrical and intricately perfect patterns to a set design.
The bowl itself is quite lopsided with an uneven lip and evidence of hand working in the glass making. The cutting is perfect, with symmetrical layout and an almost machine like finish. Edo Kiriko is, however, always hand cut glass.

This was a very expensive piece of glass when initially sold but I was able to obtain it at a price acceptable to me. I have had some confusion over the maker. Others have helped translate the script on the box lid and it indicates that it is from Yabe Glass Crafts, and that it was made by the second generation of Edo Kiriko masters there. This appears to be Hamiko Yabe, daughter of Kabushiki Yabe. Interesting, as glass masters are rarely female because the tradition is usually passed from male to male.