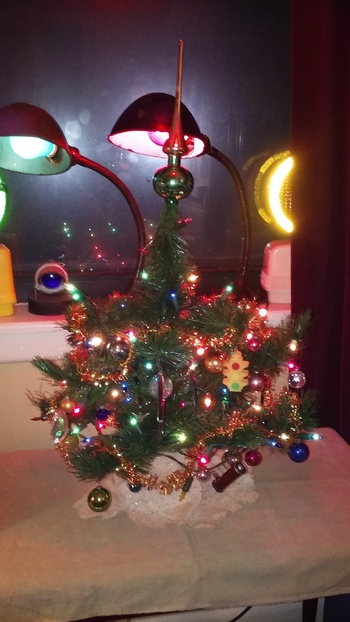 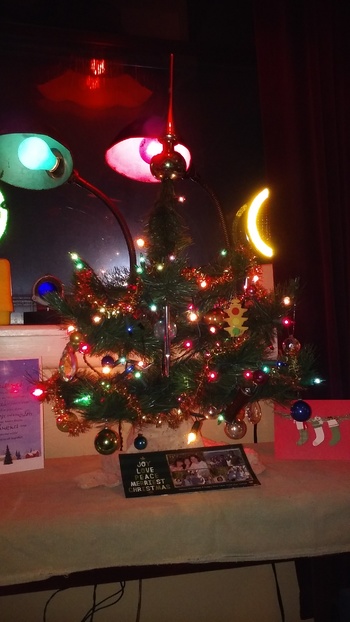 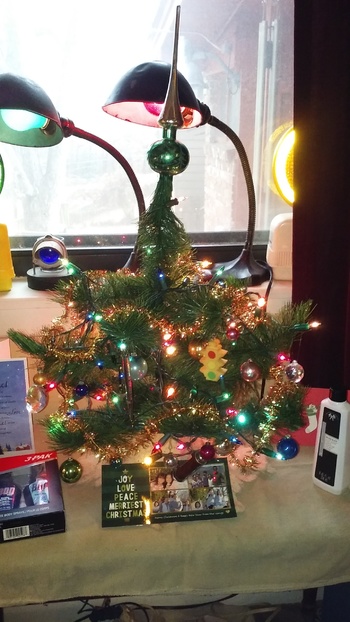 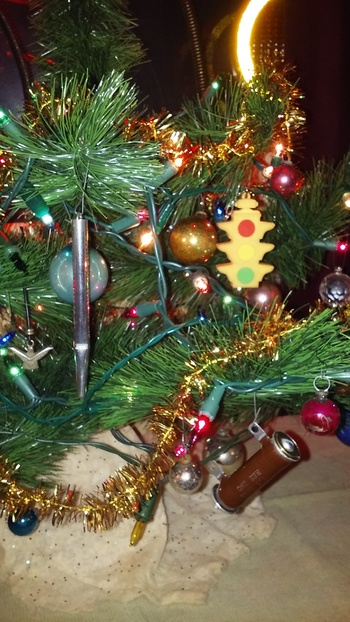 I've probably had this little fake tree for nearly 40yrs (!) since I was a kid, who spent a little of his allowance to buy it (cheap!) from a local hardware store because its original plastic base was broken. A little chunk of scrap 2x4 and a drill cured that problem handily, and its been my 'tiny tree' ever since!

The strand of slender gold garland and small glass ornament balls were "appropriated" from the family boxes of decorations, mostly because they were all sorta too little to use on the full-size family tree anyway...? (but which, of course, made them the *perfect* size for mine?!) In both cases they were 'old' even then, the garland was probably made in the 1960's and the ornaments could easily date from the 1940's or so. The topper is also glass but would be more 1970's, it was a 'family tree' item for several years, until its bottom got chipped and Dad was going to throw it out for a new one.

As I've set it up here for 2017 (last evening, after family dinner earlier in the day) I've added a few strands of blinkenlightzen plus several glass chandelier prisms (because they were pretty, and handy!) and 4 'custom items' that represent particular interests of mine as seen in the last photo. On the far left is a small sterling silver "Thunderbird" charm which once adorned a keychain, ca. 1960's. Center left is a tiny (but complete and functional!) polished tin 'organ pipe' which was also first made as a keychain, a gift from a vendor at a trade show 10-15 yrs ago. Upper right is a contemporary yellow plastic 'traffic signal' (which actually contains a USB memory stick) and lower right is a nice little brown ceramic 'resistor' (maybe manufactured in the 1960's/70's?) that just seemed appropriate this year, somehow, for some reason... ;-) :-)

Now, all I've gotta manage to do is keep the kitty from getting into it for the upcoming week. Thankfully, it doesn't make any noise and he's already used to blinkenlightzen... <lol>

CHEERS everybody!
--Tim (and Woda kitty)