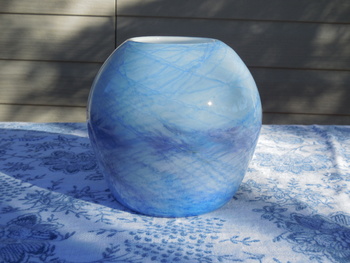 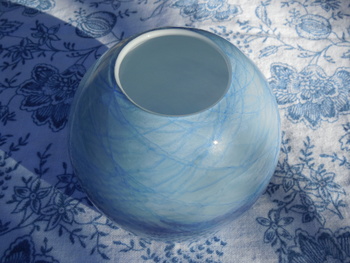 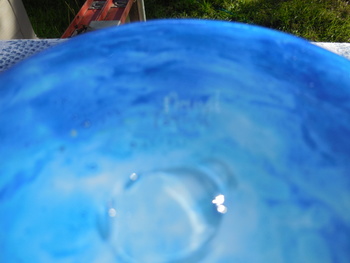 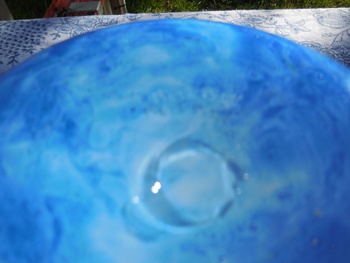 This Art Glass Vase was made at the Nourot Glass Studio in 1983, by David L. Lindsay, who has his own Lindsay Art Glass studio in Benicia, Calif. today. I have two Nourot pieces, this being my third, and two Lindsay pieces, this being my third . . .or! But just 5 pieces of art glass from both! The white interior vase has a webbing design, in blues and lavender, with a clear glass exterior. It is 6" tall and 7" at the widest, has a 3" opening on top, and a 4" bottom. pic 3 is Nourot mark, pic 4 is Mb-13-83-DLL, in script, for David L. Lindsay.
Here's some information from the Lindsay Art Glass Site:
David L. Lindsay : is a self-taught glass artist. Born and raised in Vallejo, California, he graduated from St. Patrick High School in 1975. A few months later, he became an apprentice at Nourot Glass Studio in 1976. Over the following six years, David advanced from apprentice to assistant glass blower to gaffer. David became proficient in all aspects of the glass production process from mixing batch to monitoring the melting process to blowing pieces to grinding pieces during the years as an employee of Nourot Glass Studio. In 1982, David became a partner of Nourot Glass Studio. David was a partner in Nourot Glass Studio from January 1, 1982 to December 31, 1997. In 1998, David and his wife, Ann, started Lindsay Art Glass.

Thank you for looking, all questions and comments welcome! :^)