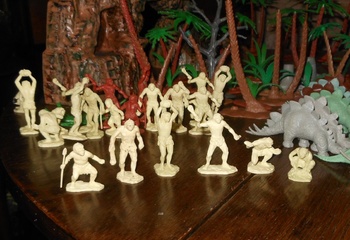 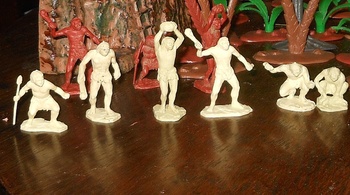 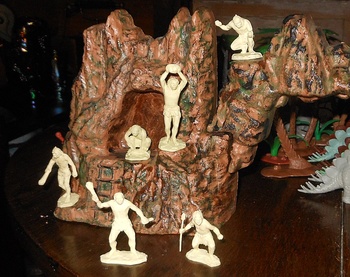 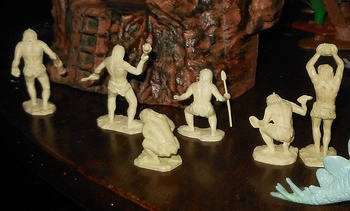 Fair photography this time although the details are still a bit washed out. I will have to figure out a lighting system so I don't have to use the flash.
As to the subject of this post it is the six cavemen Marx made to go with the dinosaur playsets. As is typical of the Marx figures they are very well sculpted. I believe the scale is what is called 54mm about 2" tall. Fits right in with the knights, Vikings, Cavalry, Cowboy, Indian, farmers, WWII and whatever else they made. They did make some earlier figures which were taller, less well sculpted and the ones called chubbies. But from the mid-late 50 and into the 1960s they made the well sculpted figures in pretty much the same scale.
The set includes 6 poses. I believe the one on the far left is a cave boy followed by big club guy, rock tossing caveman, swinging club guy, flint tool maker and fire starter. No cavewomen here. They appear to be Neanderthals. Snooty scientists changed it to Neandertals such that they can correct everyone on the pronunciation. Just tell them Brontosaurus rules. 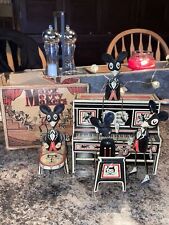