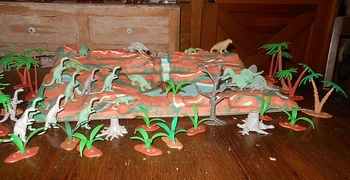 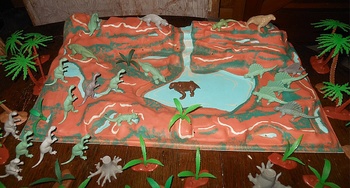 Most of these dinosaurs are not dinosaurs. They are prehistoric reptiles most of which were related to mammals and oddly enough they predate the dinosaurs.
The small mold group included from left to right in photo 2......
Cynognathus a Permian age reptile. Note the figures are not all in the same scale. They are made more for play than scientific study. Thus 7 foot long Cynognathus is close to the same size as 25 foot triceratops.
Next is Sphenacodon another mammal like reptile from the Permian. The sculpt looks like some of the very eary dinosaur recreations.
3rd row is Dimetrodon the classic fin backed dinosaur that is actuall a mammal like reptile. It's the teeth. Reptiles and dinosaurs all have just one type of teeth per creature ie all cutting teeth or all crushing teeth. Mammals and creature like Dimetrodon have multiple types of teeth such as canines and molars just like humans.
Row 4 is Triceratops a Cretaceous era dinosaur from the end of the dinosaur era. The smold group version is a bit thicker than the revised mold group version that followed in 1960.
Row 5 is Plateosaurus which is a Triassic era dinosaur. It is one of the first true dinosaurs. It eventually became Brontosaurus. It was considered to be 20 feet long when Marx made this model, now it is considered to be closer to 30.
Last is the Permian playground with Moschops from the final mold group but is also from the Permian period so he was included in the Permian play time playground.