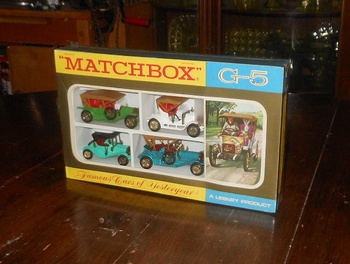 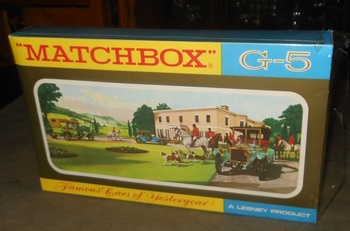 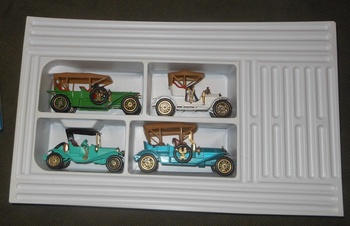 This is a Matchbox gift set. I have mentioned these before and I\thought I would post one. Just got this one today. It was still in the original shrink wrap. While pondering if I should open it or not my fingers were picking at where the plastic was open just a bit. Next thing I knew one end was open then I pulled out the plastic tray that holds the cars.
Anyway it is the G-5 Gift Set Famous Cars of Yesteryear. This set was sold in 1968 and 1969 and is the most common of the Gift Sets of that era still around today so it is affordable. . So not too much damage is done by people who may open a shrink wrapped example.
The cars in this set include the 1912 Simplex, the 1909 Opel Coupe, the 1911 Maxwell Roadster and the 1909 Thomas Flyabout.
Next a part too featuring the cars that have been freed from their prison of 50 years.