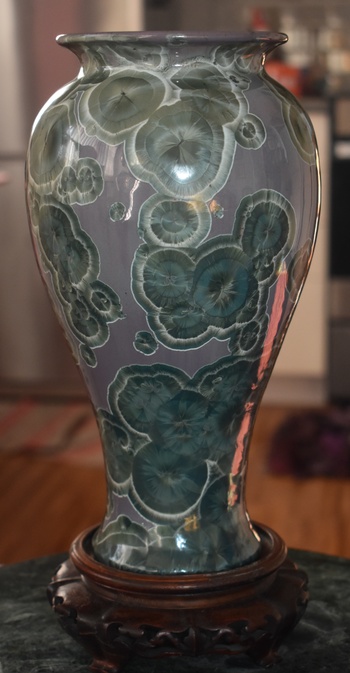 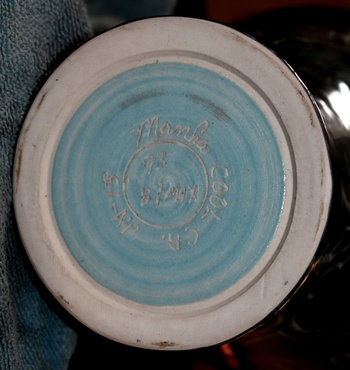 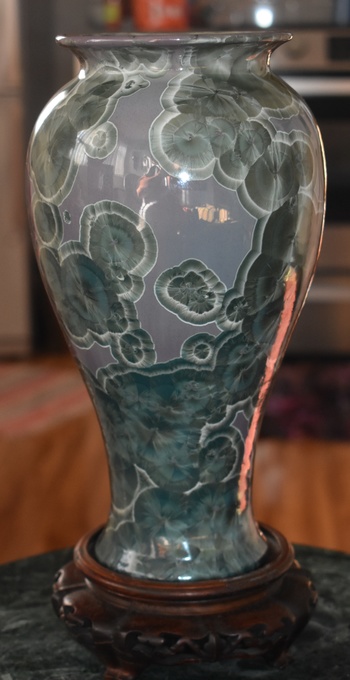 i found this at my local Goodwill the other day. It's really beautiful and in perfect condition. it's also the only one i found which is actually named - "COOL'. here's a short bio: JOHN “MANKA” MANKAMEYER (b. 1933 – d. 2015) BIO

John William “Manka” Mankameyer, age 81 and nationally respected Montana potter of Miles City, passed on July 31, 2015 at 8:00 pm, while staying at the Billings Health Clinic for rehabilitation of a stroke.

A native to Miles City, John was born November 12, 1933, the second and last child to William C. and Clara E. Mankameyer. John’s sister Joyce was born in 1930. His parents moved to Arvada, Wyoming, where John lived until the age of seven when his parents separated. He spent the next part of childhood living in different places with his mother, which included Spearfish, South Dakota, Mineral, Washington, Tacoma, Washington, and finally Eugene, Oregon – where he graduated from high school in 1952.

John then attended junior college in Eugene until he joined the United States Air Force at the beginning of 1955. He was stationed in Turkey and Italy during the early part of the Vietnam War conflict where he was a communications technician and radio operator. He received his honorable discharge in 1963.

After his discharge John moved to San Francisco where he worked at various technical jobs for about one year before moving back to Miles City. With his training in electronics during the war, he decided to open a television and radio repair shop just off of downtown’s Main Street. However, a side interest at that time was collecting Montana Agate, which he then made into jewelry. Within a few years this became his full-time business known as John’s Agate Shop. It was there that he designed and sold his gold and silver jewelry set with Montana Moss Agate and other gem stones. John’s interest in making jewelry continued the rest of his life.

Following the dissolution of his one and only short-lived and childless marriage during the early 1970s, John found the true passion of his life – “clay”! From 1975 to 2015, John lived and breathed pottery, or more specifically the art of making Crystalline Glazes on Porcelain. In fact, he obtained a national reputation for his accomplishments with crystalline glazes and sophisticated ceramic forms. And because he signed his pottery with the moniker of “Manka” (short for Mankameyer), John became known within the ceramic field by this nickname.

For forty years he was a practicing studio potter both in Miles City, Montana (1975-1985 and 2000-2015) and Cool, California (1985-2000). Numerous museums have acquired his work for their permanent collections, including the Everson Museum of Art, Minneapolis Institute of Arts, and the Oakland Museum of California. And John is credited with being one of the primary artists who helped to revive the interest among potters and collectors alike in crystalline glazes during the late 1970s well into the 1990s. Today, John is considered an iconic figure for this type of ceramic art.

In the year 2000, at age 67, John moved back to Miles City, Montana, where he entered a semi-retirement phase. He completely stopped selling his work at art shows and significantly curtailed the number of galleries that represented his art. Instead of selling his work, John launched into a strict focus on developing new color variations and crystalline formations in his glazes. He essentially began experimenting for the sake of experimenting, keeping meticulous records of each new crystalline glaze. One of the more fascinating of his accomplishments during this later period was a crystal that mimicked the appearance of a Montana moss agate – quite a visually stunning glaze.

Between 2004 and 2010 his pottery activities nearly ceased altogether. Ill health kept him from undertaking the labor-intensive activity of throwing new forms (all of his pottery is hand thrown) as well as the concentrated effort of firing his kilns. Heart surgery, which fortunately went very well, gave him renewed strength to return to what he loved for the last five years of his life -- creating the art of crystalline glazes – which he continued to create up until the time of his death. Many unfinished examples are still sitting in his studio.