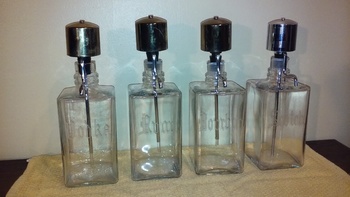 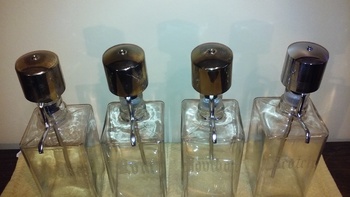 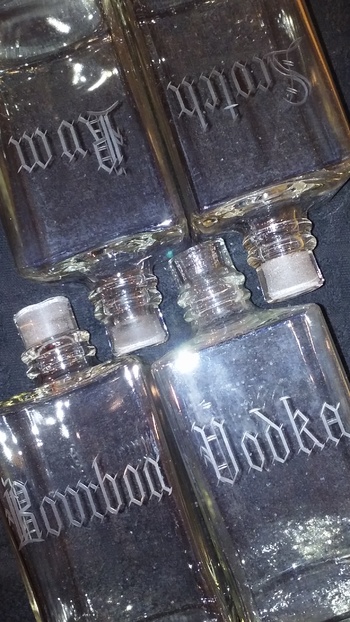 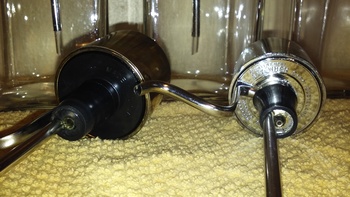 Here's one more absolutely positively not "ANCIENT ANTIQUE RARE DIVINE UNKNOWN RARE MYSTERIOUS MYTHICAL RARE RARE SACRED ANCIENT RARE RELIC" from my collections. SO sorry, I'm afraid its just a fun set of booze decanters, instead. :-) :-) [which for the record, are not for sale to trolls or anybody else...]

But anyways. I got this set of 4 decanters and 3 (gold-tone colored) dispenser tops as leftovers from a friend's garage sale several years ago, by which time I'd already had the 4th (chrome colored) pump-top by itself. The 4 bottles are about 8" tall by 3.5" square and have no marks beyond their rather elegantly script engraved legends of "Bourbon", Vodka", "Scotch", and "Rum".

The 3 pump-tops which came with the bottles seem to be mostly plastic with gold-tone (tarnished) exterior, with no markings beyond "MADE IN U.S.A." on their undersides. Presuming the bottles and these tops originally came together, there's obviously nothing terribly old or unique about any of 'em. ;-) :-)

The chrome finished pump top I already had appears to be mostly metal and of better build quality, I'm guessing it is somewhat older. It actually has maker's info on its underside, reading CONTINENTAL SAY-WHEN CORP CLEVELAND" with patent #'s. Can't help but to think the plastic ones are 'knockoffs' of this one...?