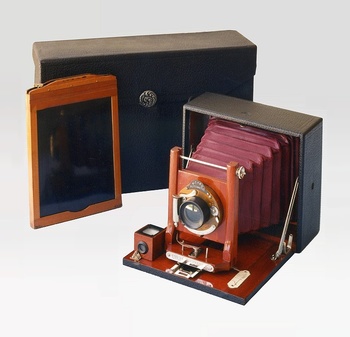 While cleaning my archives, I came across pictures of cameras that once held honored places in my collection. When first starting a collection of early American wood cameras, I looked for this type of red-bellows “self-casing” American camera and eventually acquired a large number of them.

Shown here is a very nice example of a ‘Cycle Wizard A’ by the Manhattan Optical Company of New York (the factory was located in Cresskill, New Jersey). It is a classic example of an American design that was popular from the 1890s to early 1900s . This is a simple leather covered, inexpensive 4x5 inch format camera advertised for making snapshots. The camera was acquired as an outfit with its original side-by-side case and a glass plate holder. The body is polished mahogany with nickel plated brass hardware.

As background, the term “Cycle” was sometimes added to camera names to identify models with thinner bodies that folded into very compact forms. Their side-by-side cases, in which the camera is stowed in a compartment next to the plate holders, could be attached to a bicycle’s top tube or handlebars.