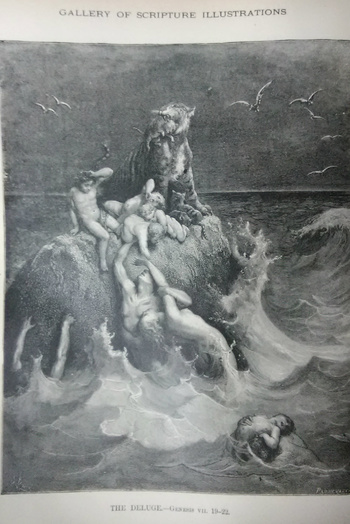 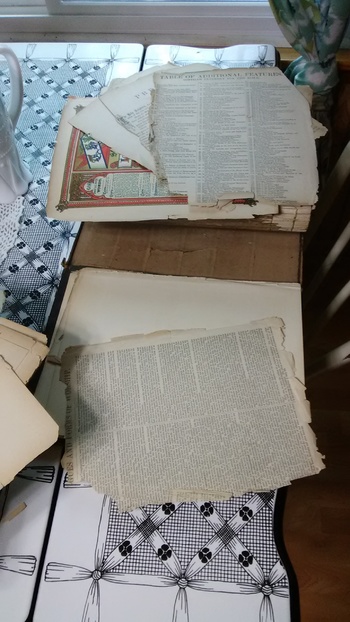 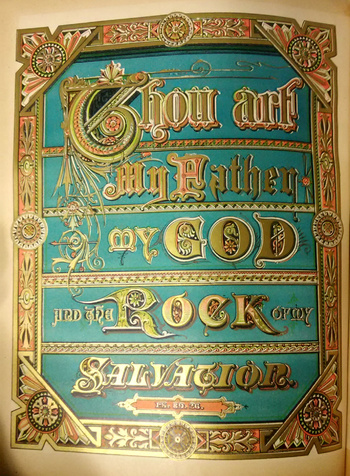 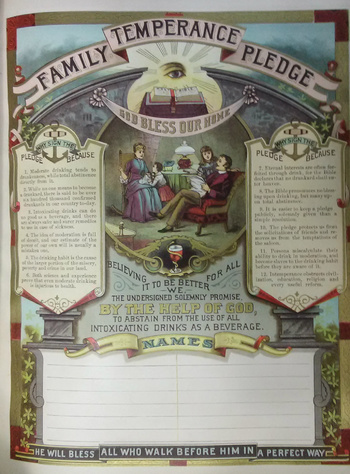 The Bible in this picture is salvageable (paper isn't falling to pieces. Binding is mostly still good. Covers and spine are entirely present). It seems to have been a present to Mr. and Mrs. Smith, possibly as a 5- or 10-year anniversary present for their new family (though there's a reference penned in to how even the taking of a child to God's arms is a blessing). There were a lot of funeral cards for a Walsh family, in the 1870s-1880s (though they might also be memento mori, made well after the fact), which may be a close friend of, perhaps, Mrs. Smith's former name.
I would assume they drank alcohol, as everything except the Temperance pledge was filled out-- there are even several carte de visites and a real-photo postal in it (along with a birthday invitation, random clippings, and an entire 1920s news-paper from a tiny town with "Grandma Smith's" obituary on front page).
My favourite engraving in the Bibles, and one of my favourites I've ever seen (I first encountered it in my Church's 1891 Bible, which I restored to a degree), is of "The Deluge."
Noah, "Preacher of righteousness," warned of God's impending punishment for 120 years, yet only he and his family were saved (as they alone believed in something greater than themselves). Two of every type of land- and air-animal (not every species, but every general representative to await future diversity through speciation) were included on the ark, which is still preserved on (having slidden quite the distance down) Mt. Ararat, with wood and some stone (as, according to some researchers, portions of it petrified when it began to become buried over millenia) still intact, (though few groups were allowed to explore it before it was made off limits by the Turks).
The engraving shows a tiger trying to protect her cub, as people and animals struggle to escape the judgement, to mount that last tip of stone, with a baby being held up on its father's(?) back as he perishes beneath it, and others even pulling at each other to try and get that last breath of air. This is why sea fossils of fairly recent age (as per scientific analysis) can be found even where rock is visible on Everest and other mountains; I would suggest this is where the sudden catastrophes that made certain sea-fossils become frozen in time (as things rarely fossilise in the ocean) with sudden mud-slides and the stirring of so much sediment. I would also suggest this is when my state, Michigan, became a salt-water sea. Noah and his family were on the ark for over a year before the water's receded enough that they could make landfall. And the dove-- the same bird that lighted on Jesus after His baptism in the Jordan-- forever became symbol of peace: God's wrath being satisfied, leading to hope of life and a future, when it returned to show Noah the leaflet that signified land-life had once again returned to Earth.