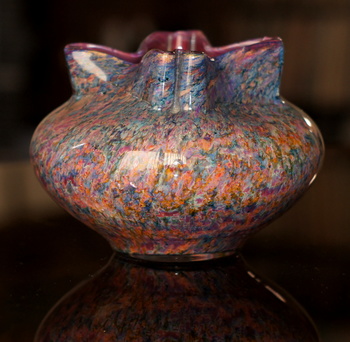 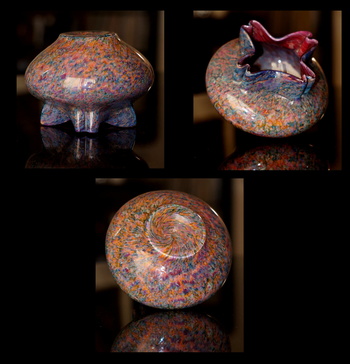 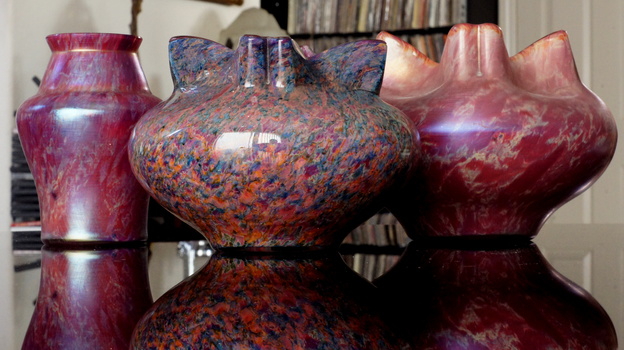 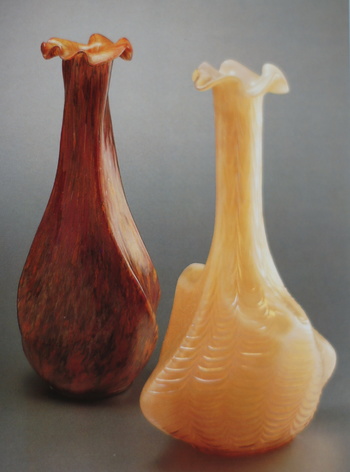 In all of my years researching Welz production, the one thing that continues to amaze me is the diversity and artistic innovation of their production.

On my website I refer to the basic ground decor of this new example as Pink Purple Iridescent. That is a name which is a derivative of the description of the glass from Passau’s “Das Bohmische Glas”. The glass formula/technique was patented by the Welz firm in 1899, and described as a an iridescent rusty brown, rosa-purple marbled glass, overlaid by clear glass. The Passau then provides an image in Vol IV, image VI.329. That image is provided in the pics. On a side note, the image also confirms Welz's production of the draped décor, a claim long disputed by another Bohemian glass researcher.

My newly found example consists of a ground as described above, and covered with spatter in a wide variety of colors as seen in the images. It is then cased in a fairly thick layer of clear. So much so, that it is actually heavier than the larger example next to it in the group image.

The vase measure 4.25 inches tall, and 5.5 inches wide at the waist. It is has a ground and polished pontil, with artifacts of the original punty rod removal seen in the center of the pontil mark.

The group image shows the newly added vase, along with two examples of the ground, with different iridescence, marbling, and variations in the color. The new vase has no iridescence to the piece at all, and is much more like a paperweight décor than the other examples.