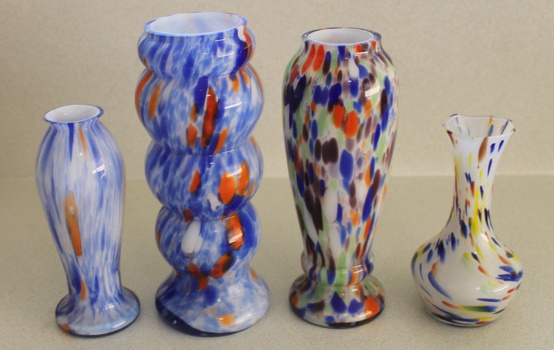 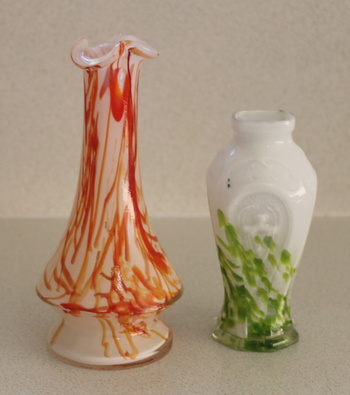 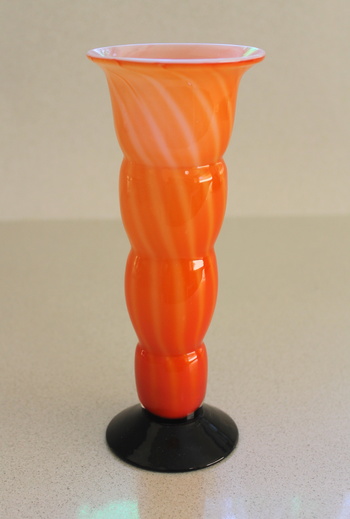 I don't have a lot of pre war Japanese glass as Australia was not a big importer from Japan until the 1950s. The few I have are mainly from the US.
This group are all identified as Japanese either by an imprinted Japan on the base, or an acid mark Japan. I am not sure if one or the other means an age thing, or if they came from different makers.
The first group shows some blueish vases that could be mistaken for Czech glass, with their inner white case, spatter and moulded bodies. Three have cut rim, a feature that was not used in Japan a lot, and was generally limited to this early export glass. The smaller vase has a flame finished rim.
Of the next two, I have posted the white/orange peloton vase before. The little green/white vase has an interesting moulded shape, and unlike the others is quite thick, mainly because of it's clear outer case.
The last orange vase is a shape I have seen also produced in green and blue. The black foot is not uncommon in Meiji and Early Showa glass, and the streaked colour and the moulded shape work really well I think.
I have some other pre war glass from Japan. I'll try and post it sooner rather than later.