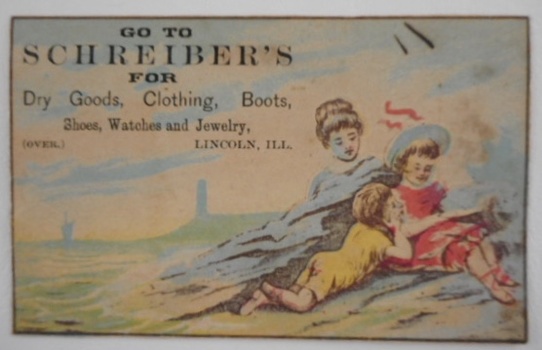 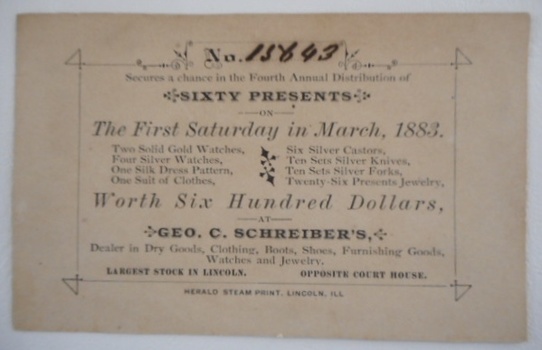 This is a unique, dual, Trade Card and a Lottery Ticket.
Schreiber's is a mercantile store selling, Dry Goods, Clothing, Boots, Shoes, Watches, and Jewelry, located in Lincoln, Ill.
The reverse side of the Trade Card is a Lottery Ticket No. 15843 with the drawing for "sixty Presents" "worth $600.00", taking place on the First Saturday in March 1883. This was their fourth annual lottery beginning in 1880. No indication of what this "lottery ticket" cost.
The prizes are:
Two Solid Gold Watches
Four Silver Watches
One Silk Dress Pattern
One Suit of Clothes
Six Silver Castors
Ten Sets Silver Knives
Ten Sets Silver Forks
Twenty-Six presents Jewelry

History on Schreiber:
George Christian Schreiber, general merchant and jeweler, of Lincoln, was born in Schmalkalden, Germany, June 29, 1839.
His father Andrew Federick, and grandfather were also jewelers. When George was 15 years old he started learning the jewelers trade.
He came to America in 1860, first in Olean, New York and worked as a watch repairman until March 1861. Fast forward, in 1866 he went to Saint Louis, Missouri and opened a jewelry store. In 1867 he moved his jewelry business to Lincoln and started making watches, except for cases (watch movements only). In 1872 he added toys & notions to his jewelry business and soon after added sewing machines and musical instruments. In 1878 he discontinued the sewing machines & musical instruments and added dry goods and clothing and continued this until he retired.
Thanks for stopping by,
Dave