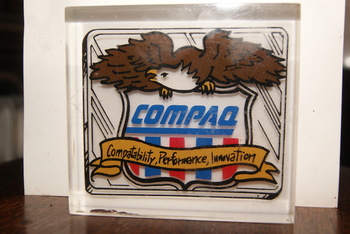 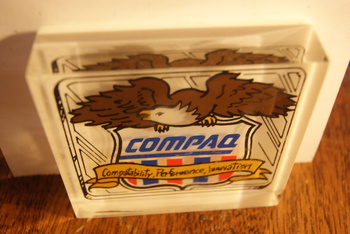 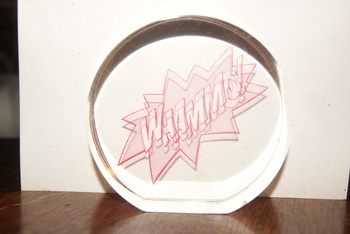 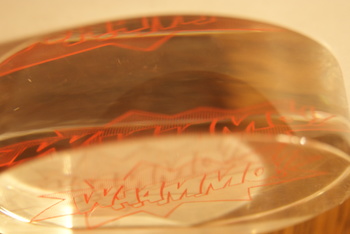 Unknown Paperweights Whammo & Compaq From paperweight Company Kansas.Samples that didn't cut it.I Don't know i would think if they made a paperweight their would be a lot out their.But i haven't been able to fin not a 1 Not even the Compaq Logo. i Got these from a Junk store out her in Kansas they were a lot that were unfinished and their a major Acrylic Paper weigh company here that did the Moon-rock for the NASA during the 1970's for the goodwill gift I spoke to the owner and he remembers the security then That was about some of the other paperweights and some had to do with aerospace and the Challenger.

I got around 40 i think and paid 0.49 each their are tiny Newspapers and other products and Aerospace powder coating medal. And as with these i have been unable to find any of those & if your my age you should remember Whammo and i think perhaps this may be the 1st Compaq Logo,Because i believe they range from the 1970 up to the 90's with the Crown Princess 1990 Inauguration had read the boat was silver and gold some place I'd like to break it out to see but it looks like it and some Oil ones with yellow powder in them.

I have search all of google images and even did a reverse search also to no avail theirs some like the Compaq but the colors are off and the wording. Let's see if you can solve this Mystery Thanks Austin Have a great weekend. O ya i did find 1 of the crown Princess but mine were unfinished rough cut took me 3 hours to finish one and still not done