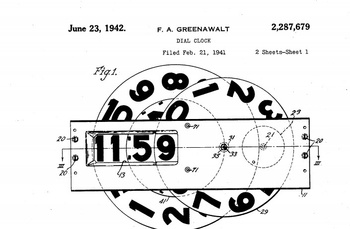 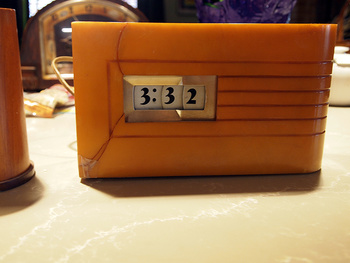 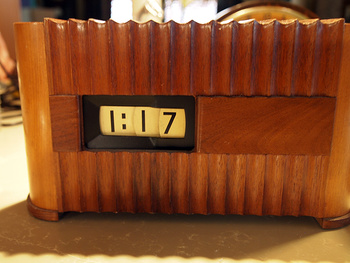 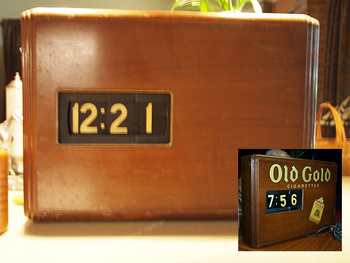 In 1942 Frederick A. Greenawalt, who originally invented and patented the movements used in both Pennwood and Lawson Digital clocks, filed another patent for a digital clock using disks instead of wheels, picture 1. Winslow and M. M. Gottlieb used the movement in this second patent for the basis of their clocks.

Winslow Manufacturing, 2nd Picture
The Winslow Manufacturing Company created striking Art Deco digital clocks in the mid to late 1930's. They were housed in Catalin plastic cabinets of various colors. Three number wheels driven by a gear train formed the readout, driven by a self-starting synchronous motor. A 7 1/2 watt incandescent bulb illuminated the wheels. The switch for this lamp was sometimes in front, more often in the rear. The recommended method for setting the clock was to use the eraser end of a pencil to rotate the wheels to the desired time.
This clock case, sadly, had a major design flaw. The movement was supported by a steel plate which was slid into the case from below. Slots were cast into each side of the case for this purpose. As the Catalin shrank, interference from the steel plate eventually caused the case to crack. Thus, it is almost unheard of to find one of these clocks with an undamaged case. This clock is 8.75 inches wide, 5” tall.

M. M. Gottlieb Associates
It may be a stretch to call the Telometer an Art Deco style clock but the reason the Telometer is included here is that it appears to have been the final resting place for the design used in the Winslow clock. The mechanisms in the Winslow and the Gottlieb's Telometer are the same, but we can tell from the 1950's-style numbers on the wheels that the Telometer came later. Whatever its style, the Telometers elaborate channeled wooden case is impressive and rather attractive, I think. The clock measures is 10" x 8.5".

Gottlieb manufactured another known large Telometer for use in offices and bank lobbies and advertising in stores, picture 4. It is a plain wooden case with numerical readout or white numbers on a black background, measuring 20" X 14". Both like Winslow’s clocks feature the hour disk that rotates in the opposite direction from the other two disks. 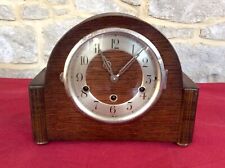 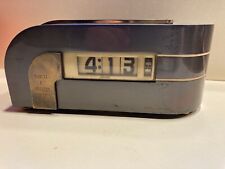 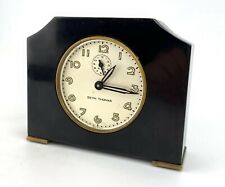 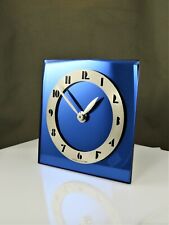