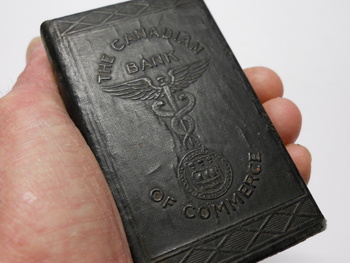 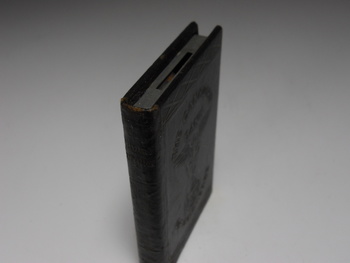 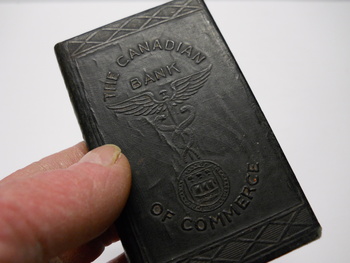 Hello Everyone.
Good evening from Ontario, Canada.
Here is one Advertising Bank from my Canadian still bank Collection"The Canadian Bank Of Commerce" in a shape of a small little book, cover with leather, embossed with the bank name, no manufacture name on it, date from the early 1920s.

Of the two banks that eventually merged to form CIBC, the Canadian Bank of Commerce was created first, formed by businessman and philanthropist William McMaster in 1867. After taking over the troubled Gore Bank in 1869 (based in Hamilton, Ontario), it became the largest bank based in Ontario with 24 branches by 1874. This included its Montréal branch, which opened in 1870 and was the first branch to be located outside of Ontario. McMaster’s background in international trading made the bank an expert in currency trading, with correspondent banking relationships in London, New York, and elsewhere.

The second of the banks, the Imperial Bank of Canada, was formed in 1874 by Henry Stark Howland, a former vice-president of the Canadian Bank of Commerce. Its first branch outside of Ontario opened in Winnipeg in 1880, part of the bank’s westward expansion. Further expansion west occurred in 1886 when they opened in Calgary — the first chartered bank branch to open in that city.

With the rapid growth of Canada, both banks grew their branch network, depositors, and business loans. The Canadian Bank of Commerce was greatly assisted in this growth when it appointed George Cox as its president in 1890. Cox often integrated the business of the bank into that of his other financial interests, including Canada Life, Imperial Life, Central Canada Loan and Savings, National Trust, A.E. Ames and Company, and Dominion Securities. This integration ensured the Canadian Bank of Commerce became a leader in business lending at the time.

In 1901, the Canadian Bank of Commerce acquired the Bank of British Columbia and its 11 branches, followed by the Bank of Halifax in 1903 and the Merchants Bank of Prince Edward Island in 1906. It followed this by merging with the Eastern Townships Bank in 1912 (based in Sherbrooke, Québec) adding some 100 offices across Canada.